The following info is from GiPA.

During the last week of September, the DVSA released its estimated volume of passenger cars MOT tests due to expire in October and November. This estimate is an update of the volumes shared in August to initiate the “Beat the rush” campaign. The key objective of “Beat the rush” is to encourage motorists to book their MOT test in advance, to avoid delays due to the MOT test backlog caused by the 6 months exemption. 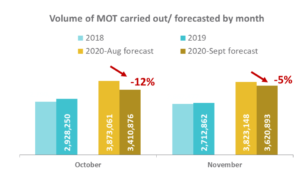 The comparison of the DVSA estimate released in August (2020-Aug forecast) and in September (2020-Sept forecast), shows that the number of MOT certificate set to expire in October and November have decreased respectively by 12% and 5%. In other terms, 12% of drivers with an MOT due in October, and 5% with theirs due in November carried their MOT test out earlier than planned to “Beat the rush”.

READ: HOW TO BEAT THE MOT SPIKE

While this is a positive development to absorb the demand, the latest October forecast still represents a 16% increase in total volume of MOT in September and a 34% increase in November when compared to 2019 monthly volume of MOT tests.