2014 Autocare show proves to be a record-breaker in Telford 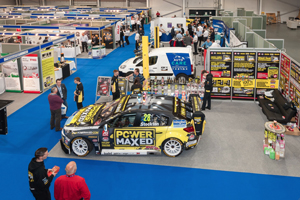 The show held for the first time at the Telford International Centre, saw 82 suppliers and more than 600 delegates, including 150 from Autocare garages all under one roof.

The show consisted of several elements including a trade exhibition, a conference and a gala dinner, where the winners of the Autocare Awards were named. Kaz Forrest of Raynor Motor Factors was named Co-ordinator of the Year, while AAK Auto Services scooped best garage.

Jim Mazza, Managing Director of Groupauto, said: “This year’s event has taken a greater step forward than even we could have imagined and I am thrilled by the positive response from members and suppliers alike.

“The move to Telford was made because we believed the event could grow and our decision has been vindicated.”

The show kicked off with a trade show which gave visitors the opportunity to meet suppliers, to take part in a number of interactive displays and ogle a couple of British Touring Car Championship vehicles.

It was followed by the conference, which was led by Mazza, who talked about the advantages and disadvantages of using the internet and social media for business activity. This was followed with an update on the progression of its Autocare and Approved Garages networks.