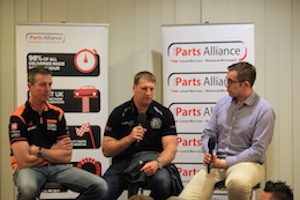 A very high turnout was recorded at a regional trade show organised by the Parts Alliance in Exeter.

The event was held in the function rooms of the Exeter Chiefs rugby club and had a variety of suppliers promoting their wares, running competitions and passing on fitting tips and best practice to technicians.

An added attraction was touring car driver Matt Neil who shared anecdotes about his career with the crowd throughout the evening.

Visitors were mostly customers of branches in the South West. Most of these branches are former Unipart Automotive sites, which were simply re-branded as Parts Alliance.

Paul Dineen, Head of Garage Programmes at The Parts Alliance said: “To host a midweek evening event and attract so many people after the working day was a great achievement. It was also half-term so a number of owners brought their families along too”.

“Huge credit goes to all the team who worked tirelessly to organise the evening and of course to the supporting suppliers and attending garage customers who made the effort to come along”.