A DROP OF THE GOOD OLD GREEN STUFF 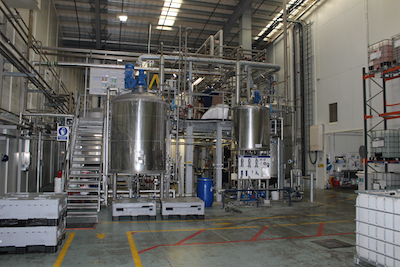 We reckon that every person reading CAT will know what we mean by Swarfega, but just in case you’ve never seen a tub, it’s a sea green gelatinous flubber that has been used for cleaning hands and arms after work. For years it has been a staple sold by accessory shops and used by the trade and by the public alike, but have you ever wondered where it comes from – or why it looks the way that it does. Well, we did – so we headed to Derbyshire to find out the story.

SOAP STORY
The product was developed in 1947 by an industrial chemist named Audley Bowdler Williamson who was apparently searching for a product to extend the life of silk stockings. However, the story goes that one formulation turned out to be great at shifting grease without damaging skin (mechanics had previously used petrol, kerosene or whatever was available, with inevitable consequences). Williamson already produced a product called ‘Deb’ for the silky legwarmers so it seems unlikely that Swarfega was ever really intended for this purpose – but what is certain is that the factory, based out of a number of buildings in Belper, Derbyshire were soon producing thousands of gallons to keep up with demand.

By the twenty-first century the maze of units around Belper were over half a century old and an update was needed. In 2005 parent firm Deb Group reorganised the 21 brands that it owned, and planned to build a new 150,000 sq ft HQ and production facility on the site of a former colliery a short distance from where the company was founded. By 2007, the new plant was finished and capital investment came from Charterhouse Investment Partners who acquired the firm in February 2010 for a reported £335m. The company was sold again in 2015 to SC Johnson (best known for household cleaning products including Mr. Muscle and Pledge) for an undisclosed amount.

CLEAN BUSINESS
We’ve seen a few factories on our travels, but we’ve never been to a soap plant before. Inside, the vast reception and atrium is – almost predictably – dazzlingly clean and shiny. Perhaps more surprising is the fact that this is a truly self-contained facility. Everything from marketing and admin through to product re-formulation and manufacturing is housed in here.

Moving from reception into the production site involves a change of clothes. Non-woven hair-nets, overshoes and smocks have to be worn as production of hand cleaners by definition has to be clean. This also means no personal items are allowed in the plant – which from our point of view means no note pads, voice recorders or cameras.

As might be expected from a modern ISO14001 plant there is a lean management process in operation and core to this is traceability of everything. The system used by this firm is Datastor Supervisory Control and Data Acquisition (SCADA) that is used to control and monitor the whole production process. Raw materials are coded on arrival and this code is logged when a batch of product is made. Things with romantic names such as ‘Sea Kelp’ and ‘Freshly Baked Baguette’ adorn the shelves – although these are stored for the most part in particularly unromantic-looking bulk containers. As a note, the plant is ‘bunded’ so in the event of a spill, no chemical would be released into the water table or to the sewers.

BULK MIXERS
The mixing plant itself is a sight to behold. Rows of giant steel silos get on with turning raw ingredients into products. From there, the finished goods are pumped into a tank farm ready to be packaged on one of a number of production lines. On our visit the Swarfega line wasn’t running, but a foaming soap was being filled into special bottles designed for wall dispensers. These cartons fold in on themselves as the soap level runs low, so that no great amount of product is left inside.

It is these types of dispensers, and not the tubs of traditional Swarfega that Deb are keen to sell to the trade. This might sound counter-productive as each measure is just 4.5ml, but the firm explain that it is the best way. Chris Brooks, Technical Product Manager at Swarfega, commented: “Using a dispensing system and not a traditional bulk bucket product can help to make significant savings. A simple change in cleaning routine could also see better results and reduce the required amount of cleanser used”.

He added that skincare is also improved as dispensers mean that garages are far more likely to use barrier cream and skin restorer as well. “A third of technicians can wash their hands as often as ten times per day – which might be because they need to move a car without getting the interior dirty or dealing with a customer. That’s a significant amount of washing and if you are using the wrong product it can do a lot of damage to your hands.”

So even the way that garages wash their hands is changing – surely there has got to be some commercial opportunity for factors open a conversation with their customers?