There might be far fewer conventions and ‘jollies’ abroad these days, but we’re pleased to say that the A1 Conference took 85 delegates and 35 supplier’s reps to the delightful Grand Majestic Hotel on the shores of Lake Maggiore in Italy. Particular mention should be given to the five suppliers, which sponsored the convention, namely Tetrosyl, Comline, Trico, Platinum and FPS.

On the day of arrival, the guests enjoyed a trip on the lake, plus a decent evening’s feed. However, in the morning after breakfast it was down to work for the Supplier meetings. Members paired up and had strictly timed five-minute sessions with each supplier. Of course, if the discussions needed to go on longer then there was plenty of opportunity later, but the point of the exercise was to introduce members to suppliers that they may not have previously had a dialogue with. 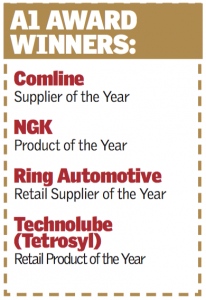 The evening event was a black-tie dinner. A1’s Head of Operations, Simon Salloway called everyone to order and announced the winners of the 2016 A1 Motor Stores’ Supplier Awards. There were only four to be made, and the accolade was taken very seriously by the suppliers as all the awards were voted for by the entire membership. See the side panel for who won.

Actually there was one more announcement to make and it was an emotional one too. A1 members Phil and Pauline Taylor from Motormania were retiring straight after the conference. Motomania has been a member of A1 for all but two years of the group’s existence and Phil had a few words to say before signing off. He said, “In all the years of being involved in membership and heading up the executive as Chairman in the past, I have never seen the group in such a healthy and exciting position. A1

certainly does have a part to play in our industry and I wish I could turn back the clock and still be part of it. I think Simon Salloway is bringing the changes and new initiative to A1 that we need and I’m sure the group will grow from strength to strength. Pauline and I would like to thank A1 members and suppliers, old and new, for allowing us to have such an enjoyable career and we wish you all success moving forward.”

We wish the Taylor’s all the best and look forward to another great event next year.