We’ve been to visit this Solihull garage on a number of occasions over the years, but this time we are not going to see the workshop, but rather the newly revamped used car sales operation.

Business owner Kamran Saleem came to the industry with a background in motor finance, so it was perhaps inevitable that his workshop started to offer a small number of used cars for sale. The problem was, there was nowhere to display them.

Parking was limited, while it was almost impossible to safely show a customer around a vehicle while it was inside the busy workshop. There wasn’t anywhere for the would-be customers to wait either, meaning they would either be shown into the MoT viewing area or ushered into a
windowless room referred to as the ‘broom cupboard’. The selection of vehicles on sale generally included ‘premium’ brand late model cars, so the cramped internal environment and the lack of a showroom was less than ideal when trying to have buyers part with more than 40k for a used car.

“It was often raining and windy outside, the cars didn’t look their best and it just wasn’t much of an ‘event’ for the customer” Saleem recalls. 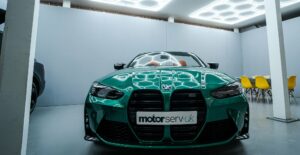 Another solution was needed. The business considered acquiring a traditional car showroom building, but this idea had its drawbacks. For a start, there were none available in the area and secondly, a large lot with dozens of vehicles was not the way to provide the kind of personal service that Saleem planned to provide.

However, a plan formed when he got wind that the unit adjacent to his would soon be available. The building had nothing to do with the motor trade (the business in residence built sets for commercial use, including trade kitchen displays), and was not especially large, but Saleem thought cars could be stored in another unit some distance away, and when a buyer makes an appointment to view, a number of cars could be brought over for them to make a selection from.

Once the unit was finally acquired, the firm spent three months and around £235k turning it into a display area.
Hexagonal overhead lights were installed to help buyers see the bodywork in detail, and a tastefully furnished lounge and kitchen area were also fitted, but the pièce de résistance has to be the car turntable, which is used for photography for the sales sites and for vehicle handover to customers, where for added theatre it is used in conjunction with a remote controlled Reveal car cover, which retracts at the push of the button while the vehicle slowly rotates to meet its new owner.

Our visit took place a few days after the official opening, which was attended by dignitaries including the local mayor and Solihull’s MP, and some of the more exotic stock used for the event, including an  Audi R8 and a Bentley Bentayga were still in the unit, although the turntable was empty, awaiting the arrival of the next vehicle ready to be handed over to a customer.

As you might expect, the business plans to make a lot of use and money out of the new facility. Around 100 cars, mostly premium-badged models, are held in the storage unit at any one time. It’s early days (and a complicated time for vehicle retail) to say exactly how much extra revenue that the new operation will produce, but Saleem is confident that the new sales department will increase overall operations by 40%, with the goal of pushing turnover to £15m. We can’t wait to see what this business does next.