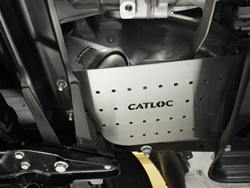 Metropolitan Police figures on catalytic converter thefts indicate no vehicle is safe, have given the aftermarket an opportunity to target sales and boost its revenue.

CatLoc has received a Freedom of Information report from the Met on thefts of cats over the last four years in London up to June 2013.

The figures show that 616 cats were reported stolen during the first part of last year, almost as many as the whole of 2010 and over half the number of thefts reported in 2011 and 2012.

The report details the makes and models of the vehicles targeted and shows that it is not only commercial vehicles and 4x4s that fall victim to this crime, but also MPVs, hatchbacks and saloons.

The list of vehicles includes BMWs, Vauxhalls, Seats and Toyotas, but the Peugeot 406 and the VW Sharan are two of the most targeted with 98 and 95 thefts respectively. Mercedes Sprinter are by far the most popular target, however, with a staggering 1392 thefts recorded.

The Met Police says that these thefts show little correlation with the rise and fall of the precious metals market, unlike copper theft. However, it does add that a key motivation for the theft is the ease of removal and the unrestricted nature of travel in the European Union.

CatLoc provides a number of bespoke solutions that helps protect the car’s important emissions system, while also being easy to fit and remove, and it adds a number of OEMs have taken active steps to protect their vehicles cats.

Currently, all Mercedes Sprinters and Ford Rangers entering the UK market come with CatLoc’s ISR marking and registration, which feeds into the police database, and allows the authorities to quickly find out where the marked asset has come from. Both manufacturers also offer a CatLoc solution for the Sprinter, Vito and Ranger at their dealerships.

Renault also offers a solution for its Master and Volkswagen will also be offering a bespoke option for the Crafter at its dealership. Catloc says that all of its products bar Mercedes solution and refit packs are available to the aftermarket.

The kits cost around £95 and take five minutes to fit, which means that workshops can give their profits a boost while also protecting a customer’s vehicle.

Previously published BBC figures at the end of 2013, show that almost 4500 cat thefts were reported for the first half of 2013 across the UK, with 13.6 percent of those coming from London. 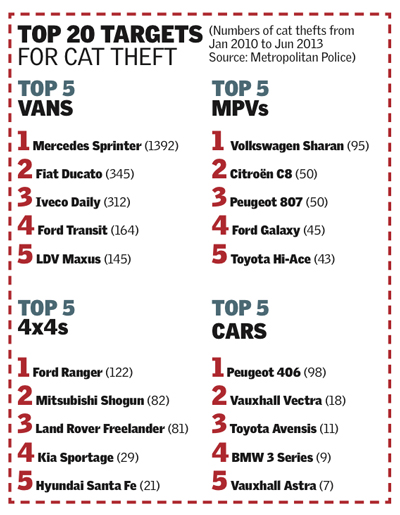