There’s one environmentally damaging aspect of the motor vehicle that mass electrification won’t eradicate: air conditioning. While there’s nothing harmful about the refrigerant gas while it is cooped up in the system, when it leaks (and it invariably does) there is a problem. For example, each gram of the most common refrigerant, R-134a, is equivalent to releasing 1.43kg of CO2 into the atmosphere.

For this reason, R-134a is being phased out in Europe and the UK. Gas producers have a quota of how much high-GWP (global warming potential) gas they can sell in a year, which reduces each year. The quota includes various blends of fluorine gas used in applications such as supermarket chillers. It is up to refrigerant suppliers to decide how much of the quota to use for mobile air conditioning (MAC) and how much to use for the others.

As an aside, R-134a was itself introduced as a greener alternative to R12, which was withdrawn in the 1990s as it was depleting the ozone layer.

R-1234yf, also known by the trade name Solstice, is the refrigerant fluorocarbon gas that has been phased in over the last few years as a replacement for R-134a. Despite early concerns from one VM, which felt its mild flammability was a safety risk, it is now an industry standard. However, motorists wishing to fill with the new gas will find that it is not a drop-in replacement. While in theory, you could rebuild the system to make it compatible, in practice owners of R-134a equipped vehicles will have to accept that the gas will soon be obsolete, but in the meantime prices will be higher.

However, just like anything else, wherever there is a demand someone will pop up to fill it.. Recently, the problem has been the growing number of illicit products on the market, often sold as R1234yf, but just like any chemical bought from the street, they could contain absolutely anything. These illegal products have been criticised for being damaging, not only to the environment or potentially to the internals of a vehicle’s air conditioning system, but also to the state of the market as the sale of these illicit products has a financial impact on producers, distributors and garages buying gas through legitimate channels. Apart from the gas itself being questionable, and money from its sale funding crime, all shipments seized in Europe so far have been in a type of canister that isn’t legal for use in the EU or the UK. 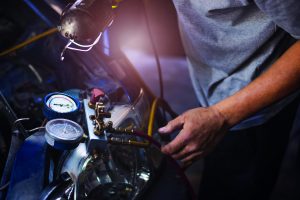 A trade body called The European Fluorocarbons Technical Committee (EFCTC) has embarked on a campaign to raise awareness of the issue. The organisation hosted a seminar late last year, at which Dave Smith, Business Director at fluoroproduct supplier Koura (previously known as Mexichem Fluor) said: “We believe that up to 20 percent of the European market for refrigerants is possibly smuggled product. It is essential that the financial community is fully aware of this issue and that it checks and, if appropriate, red flags any financial transactions that may involve the purchase of HFCs.”

Honeywell is also concerned about the amount of rogue gas on the market. Speaking to us last year, Tim Vink, Director of Regulatory Affairs at the company said that the problem had become so acute that genuine suppliers faced an ‘existential problem’ for their businesses. “The members of the EFCTC have taken the initiative to set up an ‘integrity line’ where people can report anonymously if they are offered anything suspicious in the market and that information can be used to build a picture of where these products are coming from,” he explained. The hotline and any legal action taken against perpetrators will be taken by an independent third party, because, Vink says: “We are not experts in providing the right sort of evidence.”

Anyone working on mobile air conditioning needs to be trained and certified under the F-gas regulations. As these rules were introduced by the European parliament, there was concern that the rules might change after the transition period. However, DEFRA has confirmed that they will remain the same.

protracted negotiations have produced welcome clarity and certainty for firms that operate in different parts of the EU, who feared their proof of competence would cease to be recognised after the UK formally withdraws from the EU at the end of January.” The deal, which will see the UK continue to work with EU trade bodies to ensure the integrity of F-gas trade, lays to rest concerns that UK businesses would lose their certification and be unable to trade with continental suppliers. Head of Refcom Graeme Fox commented: “Our industry is in the fortunate position of now knowing exactly where we stand on professional certification.” The announcement was welcomed by F-gas licensing body Refcom, which said, in an official statement: “Months of