ALL PEACHY AT APPLETON’S 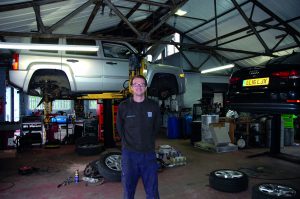 There’s a queue as we walk in to the reception of B.L Appleton, mainly because the customer at the front, an older gent, is questioning every aspect of the service on his Vauxhall, which is par for the course for any service and repair garage.

Looking out through the window on to the forecourt, I can see that this customer is not the only one to come in a motor with the Griffin badge. The business was a Vauxhall franchise in the past.

“The amount of people that come here and say: Are you still a Vauxhall dealer? You used to be one. Well, yes, but that finished in 1990,” said Phil Evans, General Manager. “We have a good number of customers that have been coming for over thirty years”.

Indeed, the business has served the community of Heald Green, near Manchester Airport, for a great deal longer than thirty years. Founded by Basil Appleton some 80 years ago the garage has remained in the same family and on the same spot ever since. Originally based from an old barn, the outbreak of WW2 put Appleton’s fledgling business on hiatus, though the army requisitioned the premises to charge the lead-acid batteries used in field wireless equipment.

After the war, the garage served the expanding suburb and its growing number of private cars as well as servicing land vehicles used by the nearby Manchester Airport.

In time, the old barn was demolished and replaced with a complex of buildings. Basil married Mabel and had two children, one of which, Gerrard, runs the business to this day.

Back to our visit, current owner Gerrard Appleton has popped in to say hello, but has to go out again shortly after, leaving us with Phil Evans to show us around.

While we were there, there was a mixture of private cars and fleet work receiving ramp time – the garage takes on fleet work from fleet managers and through a lease management company. Other than the Vauxhalls, there is a Jeep and an A4 in for service as well as some vans used airside at Manchester Airport with clogged DPFs. Spark ignition vehicles aren’t used due to risk of an explosion, meaning that diesel vehicles chug around at no more than 20mph, with inevitable consequences. “They clog up very regularly,” said Evans, “And when you do need to do a regen, let’s just say it gets very smokey”.

As mentioned, the garage long ago was a Vauxhall franchise, but today it is a proud member of the Bosch Car Service network and has been for the past ten years.

The garage is proud to support the local community, and one of the reasons for inviting us up was to tell us about a plan to raise money for St Ann’s, a nearby hospice. Among other initiatives, the garage will donate a fee for each MOT to the charity. “It’s the third time we’ve done this, the last being three years ago, but as it is our 80th anniversary and the hospice needs money we thought we’d do this for them again and advertise it on social media.

Looking ahead, Evans is keen to stress the garage needs to invest in training and tooling to look after the next generation of electric and connected vehicles. “I’ve been a technician since 2003, but in the last five years it has just gone mad,” he said, referring to the pace of change of technology. ADAS calibration equipment is also being considered. We look forward to a return visit – we won’t leave it 80 years next time.