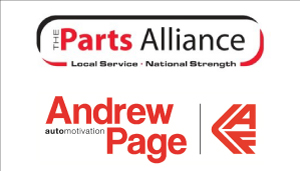 Buying and distribution group The Parts Alliance has welcomed the ‘thrilling’ return of Andrew Page as an associate member – signalling a shift in the UK aftermarket.

The Leeds-based national motor factor adds 93 branches and more than £170 million in turnover to the HgCapital backed business group, adding significantly to its national network.

Group membership now stands at 248 branches with a total turnover above £475 million.

Peter Sephton, Chief Executive of The Parts Alliance, said: “Andrew Page is a long established major force in the automotive aftermarket – it is thrilling to have the business back in the fold.

“I and my colleagues can’t wait to start working closely with Chairman Jim Sumner and all his team and sharing best-in-market systems and practice that exist across The Parts Alliance group and Andrew Page.

Jim Sumner, Executive Chairman of Andrew Page said: “We’re delighted to be back with The Parts Alliance’s rapidly expanding family of businesses. We’ve both undergone major change in recent times but these two leading aftermarket brands have a fantastic synergy and we’re a great match.”