Apprentices could generate 300% return on investment 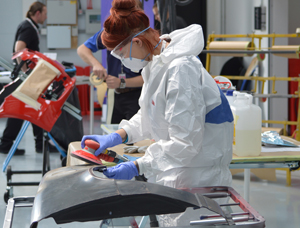 A well-recruited and trained apprentice can generate a return on investment of up to 300 percent for automotive businesses, according to a new study from the Institute of the Motor Industry.

The report also shows that apprentices that start with no experience are able to generate profit within 18 to 24 months, far sooner than was previously thought.

IMI Chief Executive Office Steve Nash said: “Businesses must overcome their doubts about employing young people and invest in the future if our industry is to succeed as a whole.

“Overwhelmingly, the results from our recent study have shown that there is a clear financial return to the business within the apprenticeship, but the attitude and support of the employer to the apprentice is critically important.

“By giving a young person opportunities to apply their skills they will ultimately become better and more productive technicians much earlier than commonly perceived.”

The two-year study, which was co-funded by the UK Commission for Employment and Skills (UKCES), looked at a cross-section of businesses from independents to franchises and involved 30 apprentices.

The UKCES has also published the results of its survey of 91,000 employers across every sector. It found that while the number of job vacancies was up 12 percent on the previous 2011 study at 655,000, the skills shortage vacancies increased far more from 91,400 to 146,200 over the same period.

Skills shortage vacancies, where an employer cannot find people with the right skills or qualifications for the job, consequently now account for more than a fifth of vacancies compared with 16 percent in 2011.

Industry trade body, the Society of Motor Manufacturers and Traders (SMMT) said, “There is a shortage of skilled engineers across the global automotive industry, particularly those with the knowledge and expertise relating to new and emerging technologies.

“The UK automotive industry is keen to tackle and fill these skills gaps to maintain and enhance the country’s position as one of the world’s leading manufacturing countries.”

Government plans to shake up apprentices have not been met with universal approval, but Skills Minister Matthew Hancock said they were necessary for boosting the image of apprenticeships and closing the skills gap.

“Vocational and academic education will only be valued equally when they are equally valuable.

“Take apprenticeships. Instead of being designed by committee, using complex, messy frameworks – we want clearer, better standards, written by employers.

“Proper graded assessments, especially at the end, higher requirements for maths and English – and a minimum of 12 months in an apprenticeship. These things make for more meaningful training.”

Critics, including the IMI, have questioned whether changes would be manageable for large companies but too burdensome for small and medium-sized enterprises.