Archive interview with Paddy Hopkirk, originally published in CAT as part of our 40th anniversary interview series in 2019

Can you start an article about Paddy Hopkirk without talking about the Mini? Hopkirk won raced in scores of different vehicles throughout his career, but it was his team’s triumph at the 1964 Monte Carlo Rally for which he will be forever remembered, and Mini specialists still stock merchandise today that celebrates that win. 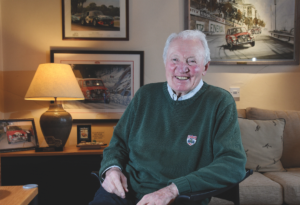 However, Paddy’s association with the aftermarket goes back way before his success in the Monte. Indeed it was sometime in the 1950s when he opened an office in his home town of Belfast as an agent distributing Speedwell tuning parts and Tip-Top (today known for garage equipment, back then best known for puncture repair consumables). “Back then, there were a lot more punctures, so there was a real demand for the product” Paddy recalled. When not racing, he’d be found going out and telling garages about the benefits of using the product.

As Paddy’s star rose, he became better known in motorsport circles and after winning the Monte in ‘64 he was a household name. Paddy joined entrepreneurs, John Cracknell and Roger Hawkins in England to sell a range of accessories and Nomex racing suits featuring the Paddy Hopkirk brand. The operation was based in Peterborough and was run day-to-day by Hawkins as Paddy was at the height of his racing career. “He ran the business, while I buggered about” recalled Paddy with a twinkle.

It was fortunate that Paddy was so closely associated with the Mini as most owners wanted to add a few creature comforts. With an aftermarket sports steering wheel, a pair of bucket seats and a set of alloy pedals (a speciality of the Hopkirk brand), even the driver of a 850cc base model could pretend he was piloting a Cooper S on a gravel course.

Run of the Mill

Paddy was interested, and in late 1969 the Mill Accessories Group launched with each of the partners having an equal share. He then sold his share in the Peterborough business back to John Cracknell.

As Paddy gave up full-time motorsport in 1970, it gave him more time to help develop the business. Rather than clip-on bits and pieces, Mill Accessories specialised in workshop and touring products such as axle stands, petrol cans, roof bars and the like. “We were metal bashers” Hopkirk recalled.

Richard Grant was bought out by the rally drivers in 1971 and continues trading in the aftermarket to this day with ‘Rearguards’, a product designed to protect the trim around the boot aperture on hatchbacks. Riley also left the business some years later, leaving Paddy and Longmuir with 50/50 shares in the company. Today, Paddy is relaxed about the split. “It was like a marriage between four people… It doesn’t last” he said. Sometime around 1973 another former rally driver (and latterly CAT columnist) Tony Mason joined the firm as Export Director.

Of all the products, Mill was best known in its early days for a line of petrol cans. “We bought the petrol can plant from [gas bottle manufacturer] Valor” said Paddy. “We then started producing them in five and ten litre sizes, plus there was an ‘Explosafe’ model with a honeycomb inside”. Cans were sold under the brand ‘Paddycan’, complete with Hopkirk’s trademark signature.

GT wheels were another popular line for the company. Castings were bought in and then machined into finished products in house. Roof bars, arguably the best-known product to bear the Paddy Hopkirk brand, were originally rebranded Auto-Maxi items, but in time the company developed and produced its own line of products.

As three of the four partners were professional rally drivers, not professional factory owners, some training was required. Paddy studied the lean-management concept of Kaizen, then a completely new concept in British manufacturing. “It applied in the factory where everything has a place and everything is in it. If you look at my dressing room, you’ll see that I don’t apply it to all aspects!” he said with a smile.

Of course, the lean workings of a factory system was not Paddy’s primary role. He spent much of this time knocking on doors of distributors and explaining why they should buy the product. “I was very busy going and selling the products around the world” he recalled. “I was a Sales Rep, well, I have always been a Sales Rep and the fact that I was quite a well known rally driver opened the door to get into retailers like CarreFour in France”.

However, a number of problems hit the business. Plastic began to replace metal in a lot of accessory shop products, notably in petrol cans where use of the material had just become legal. Plus the effects of the stock market crash in the late 1980s and a general trend away from light manufacturing in the UK conspired to hurt the business.

By the 1990s, Paddy moved in a new direction. Aided by Patrick, one of his three children, the family set up Hopkirks Ltd. “I wouldn’t say it’s a consultancy, we are reps, but we don’t trade. We are relationship builders” said Paddy. “We manage trust”  The business has a different approach to, say, a PR agency as the brand is about handling relationships between clients, both aftermarket and OE, and their  customers as well as making introductions for new businesses rather than simply sending out press releases. Today the business has a team of five and is based from an office by Paddy’s home.

Clients today include McGuard, a supplier of security products, notably locking wheel nuts both to OE and the aftermarket. BMW MINI has, for obvious reasons, appointed PAddy as a brand ambassador. 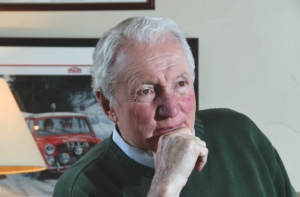 Paddy also undertakes a number of voluntary and charity positions, including Mature Driver Ambassador for IAM Roadsmart, President of the BDRC,a  non-Exec Director of SMMT, Patron of disability charity Wheelpower and others.

The keyword at Hopkirks Ltd is trust. “Even though we are dealing with big OE supply contracts with big volumes and big money, I think trust is still really important” said Paddy, adding that it makes him nervous about the lack of trust on the wider business community these days. “If I don’t trust someone I won’t do business with them” he concluded, summing up his outlook on life.