Autoelectro has teamed up with Bradford City Football Club to be a shirt sponsor.

The rotating electrics remanufacturing specialist has completed a deal that will see the company logo placed on the back of the players’ shirts and replica shirts.

The move is a new one for the Bantams, which means Autoelectro is the first company to sponsor the back of the shirt. It also sponsors a stand at Bradford’s ground, Valley Parade.

The new look shirt was given its first outing versus Coventry City, with the deal starting immediately and lasting until the conclusion of the 2015/2016 season. 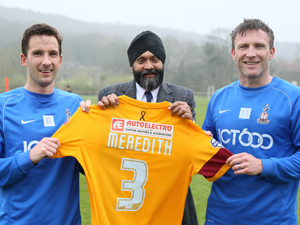 Tony Bhogal, Managing Director of Autoelectro, said: “It is obviously our local team so you have to show a little bit of support, and it will give us more exposure as we are becoming better known in the industry now.

“It is a dream come true, and bearing in mind Bradford was in the Premier League not that long ago, it is great that it is one of the best supported football clubs in League One.”

Autoelectro benefited from some increased exposure, last Friday, as the Bantams took on Rotherham United which was broadcasted by Sky to an estimated two million viewers who will have seen the company’s logo. The game end as a no score draw but inevitably proved a winner for the rotating electrics remanufacturer.