Automated cars are getting to grips with the terrain 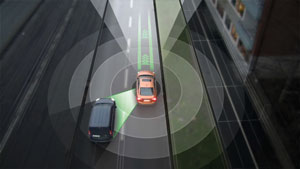 The race to produce autonomous vehicles is reaching fever pitch as on road tests and trials begin across the world. But the biggest indication that vehicle automation will become a reality sooner rather than later is the announcement of Bosch and TomTom’s partnership, and the acquisition of Nokia’s Here mapping service by a consortium consisting of Audi AG, BMW AG and Daimler AG.

Bosch and TomTom’s announcement to focus on improving the mapping data available, is seen as the next step in Bosch’s development of autonomous vehicles. The partnership between the German and Dutch firms is nothing new as TomTom played an active role in Bosch’s Connect Horizon project, by providing real-time dynamic map information, showcased at the 2014 IAA Commercial Vehicle show in Hanover.
However, this new project will see the two firms work together to create high precision mapping data for use by automated vehicles, with Bosch outlining the parameters that TomTom need to cater for. Jan Maarten de Vries, Vice President of Automotive at TomTom, said: “By the end of 2015, we want to have new high-precision maps for automated driving for all freeways and freeway-like roads in Germany.”
High precision mapping is very different to the systems currently used on satellite navigation systems, and the maps will come with several layers of data. The improvements of ‘localisation data’ will allow self-driving vehicles to access info on speed limits, traffic lights, lane dividers, geometry of the road, traffic conditions and as a result allow it to decide more effectively with its range of sensors when it is appropriate to change lanes and pass through complex interchanges.

The purchase of Here hasn’t affected planned projects and developments focussing on increasing the levels of detail available through its mapping service.
Originally known as Navteq, and being first installed on the 1994 BMW 7-Series, Here’s mapping system is currently chosen by 80 percent of VMs. The Finnish based company has already rolled out its precision maps for autonomous testing with designated routes in the United States, France and Germany, with routes in Japan set to be made available later in the year.
Research firm IHS Automotive Analysis’s Gerrit Schneemann sees the purchase as a move to lower research and development costs for automated vehicles for VMs in the long run.
“The acquisition poses an interesting opportunity of how an industry collective will share a strategic resource with competitors. The most likely answer is an industry consortium supported by an initial fee, as well as an annual fee for both membership and to support ongoing costs, collection and maintenance of high definition maps in exchange for open access to the maps provided by the consortium. Those not part of the consortium are expected to pay a normal licensing fee as they would today.
“The consortium model has many benefits for the industry, including the ability to combine resources to secure and continue developing a long-term strategic resource.”
Another dilemma is providing an answer to dealing with the amount of data being transferred from the servers to the vehicles, and vice versa. Automotive technology research firm SBD forecasts 33 million vehicles will be sold with in-car connectivity by 2020, and will generate more than 163 terabytes of data each year, which will need to be stored and available to access by other vehicles in real-time.
Dietmar Rabel, Head of Product Management at Here, said: “Your car generates a wealth of data about road and traffic conditions which will be very helpful to other cars driving behind you. By uniting around a single data specification, we can improve our collective abilities to gain a better overall understanding from the data collected.”

As high-precision mapping becomes reality, data storage and transfer will remain the final frontier but already the decision has been made to transmit data via 5G to allow seamless data transfer while they are on the move.
In line with this, the rumours that Apple is actively pursuing this sector have grown stronger, as it looks set to follow Google and other vehicle manufacturers in developing at least a connected car, with autonomous vehicles no doubt on the horizon.
Business Insider reports that Apple has been pushing ahead with ‘Project Titan’, with Ford veteran Steve Zadesky joining the development team, along with hundreds of employees the Cupertino firm has allocated to this project.
The biggest indication of an impending ‘iCar’ has been noted by German title Manager Magazin who revealed that Tim Cook, CEO of Apple, had been in negotiations with BMW and visited its Leipzig facility. It is believed that the meetings were to discuss Apple’s desire to use the BMW i3 as the underpinning for its city car.
Whether this venture gets off the ground is one to keep an eye on but with TomTom and Here developing the intelligence that automated cars can utilise, autonomous vehicles appear to be just around the corner.