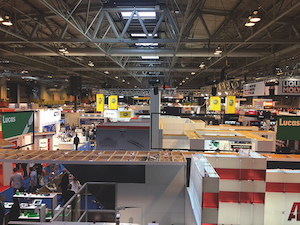 For us at the magazine, it is funny to think that 2017 was only the second time Automechanika has taken place at the NEC, such is the amount that we have written and speculated about it. Nonetheless, this is only the second time the show has happened here, and it seems much of the aftermarket holds an opinion about it.

For me, the proceedings started the day before the event as SMMT had invited a handful of journalists to dinner at a nearby country pile to talk about the show, the aftermarket and the motor industry in general. One interesting stat that Chief Exec Mike Hawes raised was that the British public now spend more online on car accessories than they do on cosmetics. I haven’t been able to verify this yet, and I suspect it includes replacement tyres and servicing booked online, but even so it goes to show that the new generation of motorists are less willing to do things the old way. A point to ponder perhaps.

After the show was opened, complete with ribbon cutting and the traditional comedy big scissors (I wonder where they come from?) the show got underway and we grab show organiser Simon Albert for a few words. As the show had only just opened, he didn’t have much to tell us that we didn’t already know, such as the longer opening hours, increase in aisle space etc. However, he did confirm his hit list of companies that he’d like to see attending in the future and, of most significance to us, confirmed that the show would return next year.

This surprised me a little, as I’d assumed that the show would become biennial in the years that the Frankfurt show was not held. However, I was keen to get going as my appointment book was full and I was running late before I had even started.

The first visit took me across Hall 19 and into Hall 20 where I could have a quick look at some of the stands as I scurried past. Liqui Moly and Auto Repar had particularly amazing looking stands. Schaeffler had used a space right next to the main entrance to build a gleaming white stage where cutaway versions of various products had been mounted on plinths for the reps to demonstrate. Valeo meanwhile, had approached the concept of having a stand in a different way, as it had simply brought a huge truck and trailer kitted out with demonstration models of various things into the hall.

MEANDERING
I won’t trouble you with the details of every meeting I had or what everyone said, except that on the first day a number of stands reported that footfall seemed a little low, which could be down to appalling weather that day as well as a crash blocking one of the motorways near the NEC that may have put some off attending. I should add that if the attendance was low on the first day, I didn’t notice it. From my point of view, Hall 19, where I spent the bulk of the time, seemed annoyingly busy with meandering people with a tendency to stop in front of me filling the aisles.

It was pleasing to see that many exhibitors had brought in things other than their products to keep people amused. Sales-i brought an Out Run arcade machine for example (a game that I spent too much time on in my youth). Denso brought a VR racing car simulator, which I quite fancied trying out, but decided not to as the racing driver Rebecca Jackson was looking on, and I had no wish to humiliate myself. Other stands brought various cars and bikes from series that they sponsor as well as the usual show novelties.

Holding an event after the show is always a risk, because while there will be a ready supply of people in the industry who are in the same place, there is no telling that they will be in the mood to go somewhere else after spending a day at the show. Even if they do, there is every chance that someone else has invited them first. With this in mind, I was curious to see how many people went to an event held by Motaquip at Warwick Castle on the first night. The answer as it turned out was a lot of people as the event was full. It was one of the more fun events that we’ve been to, with two apparently empty suits of armour jumping off the wall and alarming diners by staging a battle between the tables.

STAGES
Back at the show the following day I would have liked to have had more time to attend some of the industry and technical seminars that were taking place on a number of stages across the halls. Big names from the world of diagnostics including Frank Massey and James Dillon had been brought in as a lure to get technicians to the show (which by all accounts worked) while the heads of the garage associations talked about the various threats and opportunities du jour in the aftermarket. I did manage to get over to hear the winner of the Garage of the Year announced, which turned out to be Motorserv UK, which readers who have been paying close attention might recall we visited this time last year.

One notable absence from the show was TMD Friction (who are on record saying that they have ‘no plans’ to exhibit). However, the company did rent a plaza suite just outside of the main halls to hold a Pagid Live event in association with Euro Car Parts where a number of garage owners and technicians (the majority of whom had been brought down for the event) who, after a day at the show spend a couple of hours enjoying presentations on the benefits of the Pagid Expert programme and on ECPs garage scheme (see Hot Story).

If your reason for visiting the show was to find new products, you wouldn’t have been disappointed. Delphi brought a new bit of diagnostic kit for high- pressure injectors, European Exhaust and Catalyst introduced a 6-in-1 fuel system cleaner at the show and in a similar vein, Forté launched a 4-in-1 cleaning machine. Essentra Components launched something called a ‘High Tech Fluid Absorption Plug’ and I’m sure there were many other things never before seen at the event.

Throughout the show, I spent most of my time in the three aftermarket halls, but on the final day I had a meeting with Stericycle (a company that manages recalls for the VMs) and so I spent a while exploring the area dedicated to the automotive supply chain. It was markedly quieter than the aftermarket halls, although it should be noted that while the supply chain market as a whole is huge and worth big money, the number of buyers within it is relatively small, and stands dealing with VM services were of little interest to technicians, so it might be unfair to judge its success on the amount of feet in the room alone.

However, the highlight of the show for me came late in the afternoon on the final day when Helen Watkins from Bosch, who was manning the Extra stand, was accosted by a strange small man who kept offering her some of his special ‘home made’ sweets, much to the amusement of onlookers – apparently he’d been coming on the stand and doing this at various points throughout the show. However, just when Helen couldn’t stand the embarrassment anymore, the fellow took off what turned out to be a wig and false teeth to reveal himself as a well known customer of the firm. Apparently, his alter-ego ‘Billy No-Mates’ is a character that he regularly performs for some of his unsuspecting suppliers, and it was much to the amusement of the crowd that had built up.

It was almost time for us to leave in order to high-tail it back to London while there was still time to vote (remember that?) One point that is inescapable is the topic of the show frequency. As a conservative guess, I reckon I spoke to 40 company bosses during the show and the overwhelming majority said that they thought the show should run once every two years, preferably during the non- Frankfurt years in order to keep costs reasonable and keep the momentum of the show. From the point of view of the whole CAT team, we could have happily stayed there for a month if we could – there were so many people to see. However, I’m always curious to know the experience of our readers. Did you go? Were you exhibiting? What were the highlights, and what would you have liked to have seen? Give me a shout at greg.whitaker@haymarket.com.