By: Rob Marshall is a writer for technical motoring publications

Just because it slots into the cradle, a new 12v battery can still be incorrect. Size is not an indicator of compatibility; two batteries that are the same size can possess different internal technologies. Supplying the wrong one causes customer anguish and burdens factors and garages in refuted warranty claims. It pays to know what’s what. 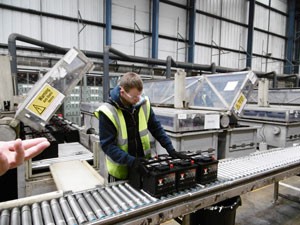 KEEP UP WITH THE TIMES

New 12v batteries can no longer be judged in terms of capacity either. Russell Shea, Business Development Manager for Banner Batteries Ltd, said: “The situation is even more limited with more complex vehicles; Absorbed Glass Mat (AGM) batteries must be replaced like-for-like.” He added that batteries needed to be replaced with units that match the chemistry and have a similar CCA spec, so the traditional replacement market, which offered motorists a choice based on cranking amps, could be disrupted. Ian Newham, Training Manager of GS Yuasa Europe, reports that installing a flooded lead-acid battery to a vehicle that requires AGM technology will cause the incompatible replacement to fail rapidly. An inability to support the deep discharging and rapid charging cycles has a catastrophic effect on the battery internally. “The accelerated loss of battery plate surface area and resultant capacity (CCA) can be as much as 16% in week one,” he said.

While modern EFB and AGM batteries provide fewer opportunities for upselling, the technologies present new prospects for tool sales. Clarios’s Technical Representative, Matt King, explains that fitting the correct diagnostic equipment. If this isn’t done, King suggests that , battery life could be shortened, and certain vehicle functions might even cease, from the Stop-Start system to the electric windows. Yet, battery programming is only part of the story. Testing is as important. King advises that  ‘Due to lack of use, the demand for 12v batteries has been huge’ 12v battery technology is only part of the story and he comments that many modern vehicles require a new replacement battery to be coded to the vehicle’s ECU, to reset the smart alternator’s charging profile. This necessitates workshops to invest in the appropriate workshops should test the battery of every vehicle that enters the premises, because a failing part represents a sales opportunity. Still, many outfits lack an up-to-date tester. Ecobat’s Battery Training Manager, Chris Jones, reasserts: “Investing in a good-quality tester will pay for itself in time, by generating extra revenue from new battery sales and installations.”

Such testers will reveal the remaining battery capacity (amps) and its state of charge (volts). As batteries lose capacity faster the longer and further the charge level dips below 12.5 volts, there are significant opportunities for battery charger sales to both private and professional users. Ring Automotive’s Battery Care Product Manager, Matt McKenzie, said: “AGM and EFB batteries should be charged by a Smart Charger and, if work is being done, such as swapping out the battery, then support charging is recommended.” GS Yuasa’s Ian Newham explains that AGM batteries benefit from a higher recharge voltage of around 14.8 volts, as opposed to 14.4 volts, but they are more sensitive to being overcharged. He, therefore, views smart chargers that possess AGM compatibility as essential, which surely comes as music to the ears of many accessory retailers, looking to upsell the more expensive smart charging units.

The fact that an equivalent AGM battery is designed for more than seven times more engine starts than a conventional flooded battery is not the best news from a sales perspective. Yet, they are still vulnerable to low-charge deterioration and much recent demand has been powered by the pandemic. Of every vehicle component, 12v batteries have probably suffered the most from COVID-19 and the ensuing restrictions. This has influenced replacement cycles. Traditionally, a battery that had deteriorated over the spring, summer and autumn months would tend to fail during the first cold snap. Yet, this demand cycle is changing. Due to cars standing for prolonged periods, their electrical systems have discharged the battery to below 12.5 volts for longer periods. Consequently, Banner’s Shea reports an “exponential increase” in sales over the past couple of years, noting that for his firm that 2020’s battery sales peak occurred not during the winter months but during the spring and summertime. Yuasa’s Ian Newham also highlighted that the effects of lockdown continued to make themselves known, due to permanent internal battery damage caused by lack of vehicle use, which has not only afflicted older batteries but also newer ones, too.

As batteries deteriorate when unused, suppliers must ensure that they reach cars in peak state. Varta’s Matt King reveals that lengthy transportation times can be detrimental to battery life. Additionally, as higher temperatures increase self-discharge rates, factors should store batteries between 15 and 20 degrees Celsius and away from sunlight, the UV from which can attack the plastic case. Having insight into your supply chain also will help you to reduce warranty claims but this does not mean you should avoid batteries sourced from abroad altogether. For example, Corby-based DC Batteries imports from Asia, and its products are placed in the cooler bowels of container ships. Once batteries arrive in its warehouse, the voltages are recorded, retested every three months and charged if necessary.