BY: Rob Marshall, CAT Contributor and an experienced technical journalist

A consequence of cars being more efficient and less polluting is their increasing intolerance to deviations from set standards. This includes not only technicians’ diagnostic methods but also parts supply, where following the manufacturer’s requirements is now more relevant than ever.

Although its exterior gives few hints, the 12v lead-acid battery has evolved internally to cope with more intense charges and discharges, demanded by stop-start and regenerative braking technology. The sophisticated AGM (Absorbent Glass Mat) batteries might have longer service lives than the regular type, or even the more high-tech Enhanced Flooded Battery (EFB), but they are also costlier. Just like engine oil, though, the ‘that’ll do’ approach is inadvisable when supplying replacements.

Some clients try to economise by downgrading the OEM battery technology. An example might be installing a regular
(or EFB) battery instead of an AGM one. Not only is this approach undesirable technically – because parts of the car’s electrical system (including the stop-start function) will cease to work – but the lesser battery will also be damaged so severely that its capacity can fall by as much as 16% in the first week of use. Unsurprisingly, battery manufacturer warranties will not cover this type of abuse.

Because a new battery has very different charging requirements from one that has reached the end of its service life, the technician must check the car for a Battery Monitoring System (BMS). If present, it must be reset with an electronic tool as part of the replacement process. Should this step be ignored, the battery cannot be recharged properly. Again, if
it is returned subsequently as faulty, the claim is unlikely
to be honoured by the manufacturer’s guarantee. 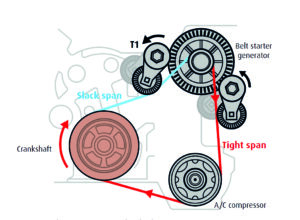 While you might supply the correct battery technology and ensure the technician has the necessary tools to reset the BMS, if required, incorrect battery handling can court premature failure. The main problem is that should the ‘state of charge’ (volts) drop below 12.5, internal sulphation results, reducing the capacity (amps/CCA), known also as the ‘state of health’.

Matt King, Varta’s Senior Technical Sales Representative, advises that although modern batteries have decent shelf lives, the oldest stock should be sold first. He explained: “A battery will be at its best when stored at a cool (approximately 15 degrees) room temperature and should not exceed 20 degrees, or become humid. This is because the chemical reaction increases with higher temperatures, which can increase self-discharge and accelerate battery ageing”.

GS Yuasa Training Manager Ian Newham concurs, but as batteries discharge naturally over time, he addresses the relevance of periodic recharging: “Batteries should be subjected to regular voltage checks, at the very least monthly during winter, to ensure that the storage voltage does not drop below 12.50v and it is charged as required. Before sale, the voltage should be checked and the serial number (found on the recharge label) recorded.”

Lockdown has been responsible for booming sales, because lead-acid batteries have discharged gradually on the many thousands of laid-up cars. The dwindling voltages have resulted in an irretrievable capacity loss in many cases and this is likely to be highlighted more as winter bites. Claire Johnson from Sealey was one of the many suppliers that told CAT about a significant hike in demand from both public and trade customers for battery testers and smart chargers. As old-fashioned constant-voltage trickle chargers risk damaging sealed 12v batteries and tend to lack the algorithms for AGM and deeply sulphated flooded EFB/SLI types, it is worth promoting the value of upgrading to a smart charger.

Modern alternators have also become smarter, meaning that the traditional technician’s method of testing for a constant 13.5-14.5v at the battery is no longer relevant. “On some vehicles, the battery has to fall below a certain voltage before the alternator will work,” Philip Rutt, Support Engineer at Pico Technology, told us.

Because a ‘smart’ alternator is controlled not by a traditional internal regulator but by the engine ECU, its output varies considerably. Being on hand to assist technicians with the relevant tools for diagnosis is a beneficial service, too. It will also avoid smart alternators being blamed as faulty, when an outdated diagnostic process is really to blame.

One of the problems mentioned can be avoided if the vehicle’s custodian keeps the batteries charged in the first place. ‘Smart’ chargers that monitor the state of health of a battery and adjust the charging programme accordingly are commonplace, but vehicles that spend most of their existence doing nothing, such as motorhomes or exotic cars that are laid up over winter, might benefit from a built-in charger such as the Ctek D250SE on-board charger and the ‘Smartpass’ power management system.

Smart alternators deliver a variable output and are shut off when they’re not needed. The D250SE will still operate even when there is low alternator output and maintain a stable output of up to 20A to fully charge the battery in the shortest time while the power management system distributes power between the starter battery, the service battery and on-board equipment, without the need for traditional diodes or VSR relays.

“Both units mean that we can guarantee a solution to any 12V set-up regardless of vehicle set-up or battery chemistry – offering even greater flexibility,” said Jerry Svedlund, Global Manager (Integrated Solutions) at CTEK.

Combined starter-alternators appeared 15 years ago and are becoming increasingly popular. Fitted to the Front End Auxiliary Drive (FEAD), they provide a smoother engine restart, where fitted, on stop-start vehicles, with an element of energy recuperation (micro-hybrid) or an engine torque boost function (mild-hybrid).

Just as with smart alternators, the challenge is to assist the installer with the diagnostics procedure, as well as managing the trade’s expectations of replacement parts’ costs.

Nick Hood, Autoelectro’s UK Sales Manager, revealed that fitting an incompatible type of battery technology can also damage combined starter-alternators. He highlighted why garages and factors can work together to help reduce the cost of quality remanufactured units, saying: “Combined starter-alternators are heavy but fragile. Spares availability is usually OE only, so if a customer sends the part back insufficiently packaged, more components are required and therefore a greater cost to rebuild is incurred, which can impact the cost of the remanufactured part.”

So, in short, always make sure that you supply the correct battery for the vehicle, whatever your customer demands, or
else it will cost you more in the near future.