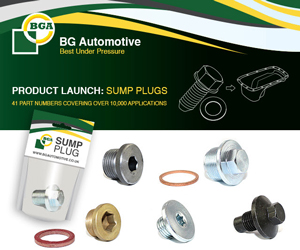 BG Automotive has extended its range of individually packed sump plugs to 41, covering more than 10,000 applications.

The decision to increase the number of parts was taken after the growing success experienced from the brand’s launch of sump pan kits in 2012.

Nick Bird, Marketing Manager at BG Automotive, believes that this extension to the sump plug range is a lucrative upselling opportunity for garages.

He adds that the sump plug can be damaged during an oil change, whether it is done during the removal, the re-use or overtightening of the plug, which is why he suggests replacing the sump plug after every service, oil change and repair.

Research from BG shows that despite there being more than 32 million cars and light commercial vehicles on the road, it suggests only 1.5 million sump plugs are changed annually.