Belts, both timing and auxiliary, tends to be a relatively static market dominated by ContiTech, Dayco and Gates. However, all of these have released products with new technology in recent months. 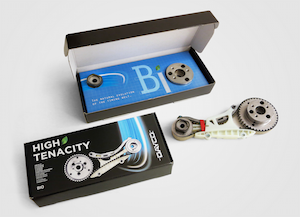 Gates introduced a new version of its Micro-V auxiliary belt at the Birmingham show. While the firm doesn’t hide the fact that this is an aftermarket product, it is keen to stress that it uses the same EPDM rubber compounds in both OE and aftermarket products. The firm offers the belt in four variations, including a type for stop/start, another for stretch fit, a third called Unique Fit, which is described as being for ‘sensitive systems’ and a general purpose range that will work on 90 percent of the UK parc.

Dayco, meanwhile has introduced a new range of belts, known as ‘HK’. These newcomers feature a design of tooth lining fabric and weave that incorporates aramid fibres. This combination achieves high wear performance and greater adaptability to tooth geometry, which makes them effective for high-stress systems.

UNDER STRESS
These belts are now making their appearance in the aftermarket and are included in specific timing belt and water pump kit applications, with the HK suffix in their marking. However, kits for these new belts will only be available for references that are specified by the VMs to have them. Steve Carolan, Sales Manager for the firm said: “We only supply garages like for like what they take off. We could theoretically supply the [new] belt and it might give some improvement in performance because they have a higher load capacity, [but] we want to give garages exactly what the VMs buy”.

Making the most major change to its line-up is ContiTech. With the tagline ‘black has always been our colour, but now we’ve added silver’, the group has introduced timing chain kits. “Full-line distributor is the keyword here” says Dennis Roth, PM for the timing chain project. “We’re constantly reinventing ourselves with the aim of offering our customers with the complete range of power transmission components”.

The firm will initially offer a short range of 43 kits to cover fast moving applications. As might be expected from a modern kit, each box will contain the various guides and pulleys needed for the repair and will be supported by a five- year guarantee. As with ContiTech’s rivals, a series of training videos under the ‘Watch and Work’ banner will be put online to coincide with the products going onsale.

WET TECHNOLOGY
Timing chains have made a resurgence in recent years, but the death of the belt is greatly exaggerated. Dayco’s Steve Carolan said: “While the amount of engines with belts has dropped to something like 47 percent. I don’t see any significant change for many years – it will reduce but not a significant amount. We think the popularity of stop/start systems will increase the business for auxiliary belts.

Belt in oil – a technology which is now a decade old covers a ‘grey area’ where there is no clear advantage for the VM to use either conventional belt or chain according to Carolan. The firm produces kits for applications to use these system, and they remain strong sellers.

In the past, engine designers have experimented with deleting belts and chains altogether on OHC motors and trying gear-driven mechanisms. These have not been successful, but who knows what the future will bring?