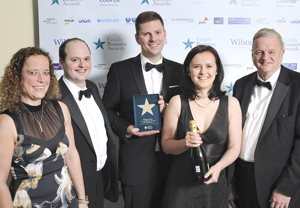 The Nottinghamshire-based company has won the accolade for the second-year running, after demonstrating again its ability to continue with its development, success, commitment to innovation and excellent governance.

John Massey, Chairman of BM said: “We’ve come a long way since we started on the day England won the World Cup in 1966.

“Winning the award for Manufacturing Excellence last year provided a fantastic boost for us and our staff as we continue to expand in European and global markets.

“Finding out that we had been shortlisted again at the Midlands Family Business Awards was great recognition for the company in itself, but winning is personally and professionally satisfying for my son and I as it endorses our belief in our family values and the success as a family run business.”

Collecting the award has rounded off a successful year for the company after it expanded its manufacturing facilities, investing in new technology and machinery and with export sales accounting for than 50 percent of its sales. It also launched its new selective reduction catalyst at Equip Auto.