Bodyshops values have declined but hope is on the horizon 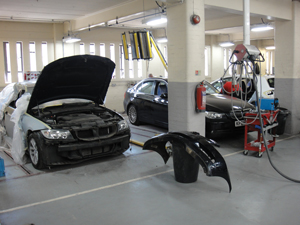 The value of the UK car body repair market has dropped by 34 percent in a decade says automotive research firm Trend Tracker, which it attributes to the advance in vehicle technology among many other contributory factors.

Trend Tracker says that the drop in volumes of repairs is down to insurance claims decreasing over a majority of the last decade although it acknowledges a recent rise. It adds that the average mileage driven has dropped as well as the increased adoption of new safety technology.

The advancements in anti-lock braking systems and other devices such as adaptive cruise control and emergency brake assist has reduced the frequency of crashes and the severity, which in turn will lower the cost of repairs.

Trend Tracker Director Chris Oakham, says: “The increase in safety features such as Lane Departure Warning, Adaptive Cruise Control and Emergency Brake Assist in new cars is likely to reduce the frequency of accidents in normal conditions as ABS has done in the past, while the congestion now endemic in urban traffic will reduce the severity of the average collision, along with the average value of collision repairs.”

However Trend Tracker’s report also showed that the average repair costs has risen from £932 in 2004 to £1,119 in 2014, but in real terms, after inflation as measured by the Retail Prices Index, they are estimated to have fallen by 13 percent in the past decade.

Despite the tough conditions that bodyshops have been operating in, Oakham says there is some optimism on the horizon, adding: “The outlook for bodyshops is highly dependent on a continuing recovery in the UK economy, reviving demand for new and used cars, and giving motorists back more spare cash for elective repairs.”

The report expects average repair costs to increase gradually, and repair volumes by two percent, while the value of the market is expected to rise by five percent after inflation by 2020.