Uncertainty surrounds the timing of Brexit, but when it does happen, there will undoubtedly be an impact on UK businesses and their contracts. It is important that organisations consider how Brexit might affect existing contracts.

For many businesses, Brexit could impact their supply chain and they should consider the performance of obligations by subcontractors and suppliers. Other key areas to consider include; term, territory, currency, tariffs, customs clearance, resources, licensing/ consents and tax. Failure to review and plan for these could result in increased costs and/or damage to business performance.

A contract typically contains force majeure clauses. Depending on the drafting, these can relieve a party from liability for a breach resulting from ‘circumstances beyond its reasonable control’. However, if Brexit was likely when the contract was agreed, it could be argued the parties should have planned for its effects. Without a specific reference to Brexit, force majeure clauses are unlikely to help of itself, but depending how the clause was drafted, it might address delays in delivery of goods due to crossborder issues.

Many contracts state that parties must comply with applicable law. It will be a matter of interpretation whether such a clause could oblige a party to absorb the costs associated with Brexit-related changes in law. Long-term contracts typically address what will happen if the law changes, often specifying that charges can only be increased in limited circumstances, with the supplier required to consult with the customer before making any changes.

The contract may include scope for termination, by either party. This may be in connection with circumstances arising from Brexit related events or a failure to agree a change. If a contract’s termination clause gives a party a right to terminate on relatively short notice, the prospect of termination can always be raised to encourage negotiation. 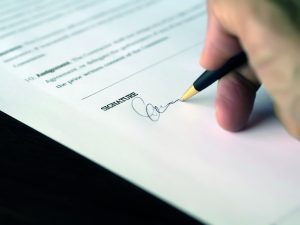 Frustration arises where an event occurs after the date of the contract, radically transforming the obligations of either party or making it impossible to fulfil the contract. However, a contract is not frustrated due to inconvenience, hardship, financial loss or when the event should have been foreseen by the parties. As such, it is generally accepted that frustration will not help with Brexit, although it might apply if certain changes in law were to be made subsequently, which would make it impossible to fulfil a contract.

The courts are unlikely to interpret a contract or imply a term to assist a party adversely affected by Brexit and will not relieve a party from the consequences of their poor business practices, if that involves departing from the natural meaning of the contract. Similarly, the fairness of a proposed implied term or the fact that the parties would agree to it is insufficient grounds for implying it. Both interpretation and implication of terms have regard to the background knowledge reasonably available to the parties at the time they entered the contract.

What are the options?

By not drafting contracts that address Brexit uncertainty, there is a risk that a party will be obliged to continue to fulfil its contractual obligations, even if Brexit-related events render it commercially unattractive. However, doing nothing may be an option for a party who can terminate contracts at short notice or are confident in their ability to perform regardless of Brexit’s outcome.

Inserting a ‘Brexit clause’ into contracts will trigger some change in the parties’ rights and obligations when a defined event occurs. The best a Brexit clause may offer is a binding requirement for the parties to try and renegotiate the contract. For other contracts, it may be possible to specify the consequences of certain events, but with Brexit, there is the risk that events occur that have not been first considered.

Organisations must take the time to review their existing commercial contracts, ensuring every possible outcome is accounted for and the necessary clauses are added. Seek advice from experienced contract lawyers and plan for life after Brexit, sooner rather than later.