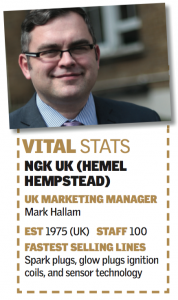 Most workshops will know the NGK brand through its BoxClever scheme, where customers can trade in their empty lambda sensor boxes in exchange for reward points to spend on an array of gifts at the firm.

Besides this loyalty programme, the manufacturer has had a strong foothold in the aftermarket for many years; beginning its operations in Nagoya, Japan 81 years ago. Eventually, the firm expanded its footprint overseas by building spark plug factories around the world. Presently, the network totals 11 factories, four development sites and over 20 sales offices worldwide.

LOGISTICS
However, today’s visit brought us to its UK headquarters in Hemel Hempstead, which was previously located in Hendon (North West London) before relocating nearly two decades ago. “The transition of NGK’s UK HQ to Hemel Hempstead was due to the requirement for more space for a rapidly growing business”, said Mark Hallam, UK Marketing Manager at the firm. “The Hemel Hempstead site was purpose built in a location with transport links ensuring an efficient delivery service to our customers”, adding that the warehouse had previously been extended to stock its core ignition lines with plans in the pipeline to expand it even further due to company expansion.

The current premises houses 100 staff and a large warehouse space where parts are sourced from Japan and distributed to trade and supply chain customers across the country. The site contains a finance and marketing department as well as its sales office and OE division where a team of staff are employed to communicate directly with vehicle manufacturers. Hallam elaborated. “NGK work directly with all of the major VMs around the world”, he continued. “NGK Spark Plugs and lambda sensors are the world’s number one OE fitment”.

BRANDING
Despite the firm’s bread and butter being in in glow and spark plug sales, this is not the only part of the business. “NGK are more than just a spark plug company,” remarked Hallam. “We also sell glow plugs, lambda, NOx, EGT, MAF and MAP sensors as well as ignition coils and spark plug covers. Under our NTK brand we also operate a specialist Technical Ceramics division from Hemel Hempstead specialising in ceramic cutting tools and IC packages.”

To communicate its ‘more than spark plugs’ message to garages, the firm recently launched a range of aftermarket products under the NTK division with over 150 part numbers, including 87 Mass Air Flow (MAF) sensors and 69 Manifold Absolute Pressure (MAP) sensors that have been ‘well received’ so far. In addition, the company updated its logos to bring awareness to both businesses. “In 2016, NGK developed a new brand identity with two new logos. “All ignition related products come under ‘NGK’s Ignition Parts’ with all sensor products coming under ‘NTK Vehicle Electronics’”, noted Hallam.

STAFF RETENTION
Staff longevity has played a crucial role in business expansion with most employees possessing over 20 years experience The standard setup involves a team of reps that are sent out to different regions in the country to work closely with existing customers by developing and keeping their stock holdings competitive as well as scouting out new leads to grow the firm’s UK footprint. “The NGK sales representatives are an asset to the company offering our customers market leading sales, product and technical support across the UK”, said Hallam. He adds that staff loyalty has played a big contribution towards the receiving its A1 Motor Stores Award, which proudly sits behind a glass trophy cabinet in the foyer area.

Going into the autumn and winter months, the team at Hemel Hempstead will continue growing the UK base organically through customer retention while hammering home the message of NGK and its various subsidiary brands. Although there are some new developments on the cards, everything is being kept top secret until a big reveal at Automechanika Frankfurt next year.