Can gender diversity help the aftermarket? 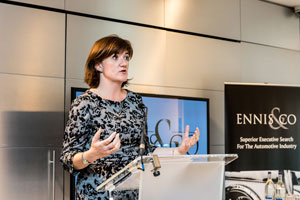 Simon Withers discusses how attracting women to the automotive industry and ensuring a more even male/female split can benefit the sector.

Late last year, the firm I work for held an event to discuss the need to attract more women to the automotive industry. We heard candid (and inspiring) speeches from a panel of women representing the breadth of the automotive sector as well as media, law and government. I’m delighted to be able to share some of their thoughts and know-how with you.

There is no one reliable authoritative source of data on the numbers of women in the automotive industry as a whole, with the stats for retail being owned within the company. Recently, the RMI suggested the male/female split is about 80/20, which is broadly supported by in-house figures. A more telling statistic is how dramatically this drops within senior operational roles.

Sian Vernon, HR Director of Renault, is glad that the dialogue we’re having now has moved beyond simply admiring the problem. “It feels to me like the focus of the ‘gender debate’ within automotive, at last, is on the business case for gender diversity, rather than being on the age-old men v women argument,” she says. “Changing the way we work to facilitate a greater flexibility for men and women alike is where we’re headed. It’s the right thing for society and the right thing for all businesses.”

It would be pointless, of course if the conversation about gender diversity was one that existed only between women when it is men, overwhelmingly, who still occupy the top table within the sector. Robert Forrester, CEO of Vertu Motors PLC, was the first male in a previously all-female college at Oxford whose alumni include MP Nicky Morgan, and the need to change the industry’s appeal to women is high on his agenda.

As steward of the sixth largest automotive retailer in the UK, he has set up a task force to address the question of why so few women are moving up through the ranks of automotive retail, working with senior women within the business to examine the issue and creating a graduate scheme designed to attract more female students.

He is candid about what drives him to push for change. “I’m not enthused by the stats for women General Managers in our dealerships,” he says. “We have two out of about 100 in the Automotive Dealership business. But when you start to look at other business units outside of dealerships, the numbers of senior women go up. We’ve got some great women managing other parts of the business, for instance our Wheelchair Accessible Vehicle firm, Bristol Street Versa, has a woman GM. Look at the automotive dealership operational side, though, and women aren’t breaking through. This isn’t a Vertu issue, it’s an industry issue.”

For Robert, there are deep structural reasons why this is so, among them that automotive retail is demanding on time and doesn’t allow for much flexibility. Does he agree that the sector creates a binary choice of career or family for women? “Absolutely”.

The need to make the sector an attractive career choice for students is another concern for industry professionals, and one that attracted a lot of press coverage throughout 2014, particularly within the more generalised debate about the STEM agenda and the government’s Your Life campaign.

“We need to make sure we’re making the industry a serious possibility for the future for students in their teens,” Isobel thinks. “Most of the women I know in the industry have fallen into it by chance or luck, which is fine, but equally there should be evidence of it being an active career sought out by women in the future,” she says.

Julia Muir agrees. She teaches the Generating Customer Loyalty course at the Centre for Automotive Management at Loughborough University School for Business and Economics.

“For businesses to have true empathy with their customers and a deep understanding of their wants and needs, it makes sense that the gender mix within the organisation should reflect that of their customer base,” she opines. In this context, Frost and Sullivan’s assessment that 80 percent of automotive buying decisions are influenced by women makes the case for change a pretty sensible one.

One thing we all agree on is that our industry is a success story, but one whose continued health depends on diversification. Ennis & Co and some of our partners have formed a working group to try to address this. We are fortunate to be able to tap into the expertise of a broad range of people who’ve expressed an interest in the group – from retail to manufacture, and outside of the industry too.

It’s early days, and this working group will be a collective effort: one that will rely on the passion and generosity of its members who have already shown so much enthusiasm for the task. I hope that we can share some successes with you in the future.