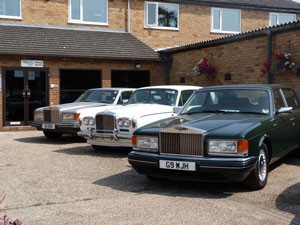 Flying Spares is currently celebrating its 20th anniversary supplying the aftermarket with spare parts for the luxurious post-war Rolls-Royces and Bentleys, but how Director Ben Handford originally got into the game is somewhat unusual.

The story begins on the Greek Island of Paros, where Handford had found himself washing dishes at a hotel. While on duty he met an Irishman who worked for a company based in London selling Rolls-Royce parts.

“He wanted somebody to do his accounts,” explained Handford. “I had done a maths degree and he said he would give me a job. It was by complete fluke, I couldn’t even drive at the time, I was fresh out of university. But once I’d worked in London for three and a half years, I thought let’s have a go in Leicestershire.”

Handford along with his wife and fellow Director Lucy set up the business in the yard of her parents’ transport business, from a portakabin and a 40ft trailer full of spare parts. It was from here that business started to snowball. Even though at the outset they had to be careful with promoting the business. 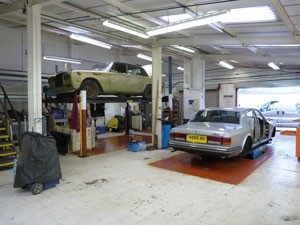 “Having worked for what is now a competitor, you had to be careful not take all their customers. It is a very small community so there won’t be many in the trade who don’t know us now. It was steady to start with and then the arrival of internet helped sales internationally.”

The emergence of modern technology has helped Flying Spares and its mail order business to continue growing with the firm already adding a number of communication methods to its repertoire, including interactions via WhatsApp, Live Chat facilities with possible mobile applications on the horizon.

Handford adds: “The internet is the one major thing that has helped us as a mail order business. It has made it a lot easier than it could have been. If you are a garage, you have about a 100-mile radius of customers and depend on people who will travel, but with parts we can get them there next day. We can get parts into Australia quicker than Australians can ship parts across Australia.”

The technology aside, the site at Flying Spares is quite a sight to behold, even though it’s currently split across a number of 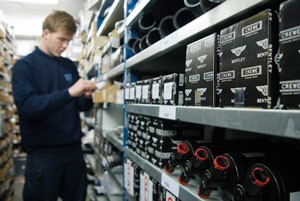 buildings, with a myriad of Rolls-Royces and Bentleys waiting for a new owner or alternatively to be broken down to benefit contemporaries still on the road.

One building holds a mixture of OE and new parts for post war Bentleys and Rolls-Royces including for the latest models including the Continental GT, Flying Spur and Phantom. There is a team of technicians who tidy cars up for sale and dismantle others for parts such as water pumps, axles, steering racks, brake calipers and gearboxes to be sold on or reconditioned. There is a warehouse stuffed full of used spares, including grilles and engine blocks.

“When we set up I felt my previous company weren’t dismantling enough cars, and I thought they were missing a trick, but it then became a bit of a problem as we were being perceived as a glorified scrap yard for Bentleys and Rolls-Royces,” said Handford, “but second-hand parts is now less than ten percent of turnover, 15-20 percent is reconditioned, and 70 percent i 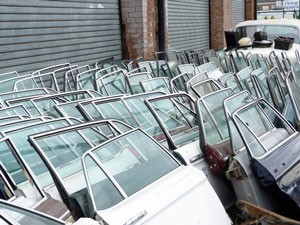 s new, with a split of 50 percent between genuine new OE Bentley and Rolls-Royce parts and 50 percent aftermarket.”

While business has continually grown over the last two decades, Handford is quick to point out that the business was nervous of what the outcome might have been when BMW and VW bought out the brands in 2004. But their fears were groundless as it meant access to a whole new market of cars and customers. Bentley and Rolls-Royce both also ramped up production, which increased the market for Flying Spares.

As the company celebrates its 20th year, Handford has no plans to make any drastic changes, with him and his team solely focused on keeping new and old flying ladies and B’s where they belong: on the road