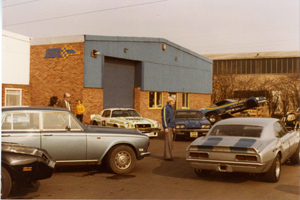 John Woolfe Racing has been around for almost 50 years, and the name harks back to a racing great who tragically lost his life at the beginning of the 1969 Le Mans race.

Owner David Riswick decided all those years ago that he would continue to grow the business he originally developed with Woolfe to import American car and race parts into the UK.

Some will already know that Riswick played a fundamental part in creating the UK drag scene of today, and there is not enough space in this article to tell his many great stories.

But he says that it seemed natural for him to immerse himself into drag racing as he grew up on the West Coast of America.

However, the success of John Woolfe Racing wasn’t just down to drag racing bursting onto the UK scene. In fact Riswick had spotted how it fused with other areas of an American lifestyle and sought to bring that here.

“I was 25 when I kicked this off in 1968 and I am now 70,” said Riswick. “I have had one big party during all of those years, and the relationships I have developed with people have been phenomenal. I came out of the West Coast, and I had all of the grounding of what was going to be big in the UK years later. I didn’t realise it at first as I was too young, very enthusiastic, wide eyed and hadn’t got a clue.”

John Woolfe Racing was a leader in innovation and new trends and created new markets for people to get excited about.

He said: “We were really going onto a rock’n’roll situation that had nothing to do with American cars but the lifestyle. This is what has evolved in the business, just like skateboards, until our insurance broker started talking about the problem of liability. He said ‘Stop selling them, we can’t deal with all the broken legs’. It was those kind of things that made life here very exciting.”

CB Radios became an opportunity Riswick could not pass up, as the nation went crazy for them after Burt Reynolds used one in the film Convoy.

Riswick added: “We were bringing in aerials and all kinds of equipment to augment CB radios. However, we initially didn’t bring the radios in because it was illegal to use them in this country.

“I then found a loophole in the law that actually allowed us to legitimately import them, pay VAT on them and put them on the shelves. I couldn’t use them, but I could sell them. That is how it all started off and we ended up bringing stacks of those things in.”

While trends played their part in keeping the business ahead of the curve, he is quick to point out that John Woolfe’s name played a big part in making this venture a success, because of his iconic status.

He adds a similar situation has occurred with the death of Paul Walker, one of the stars from the Fast and Furious movie series.

“There is such an enthusiasm for the films,” he said. “It’s a huge business and it has grown on the unfortunate death of this chap into a cult worship programme. I could see that happening with what we were doing back in the 60s and 70s. It was history repeating itself again.

“I was thinking this was a single generation business, but we have survived the test of time, and John would have been very proud of us.”

Even to this day John Woolfe Racing has stayed true to its roots and has resisted temptation to switch its focus. Riswick added over time the business has evolved to selling service parts to keep American vehicles on the road.

“The technology doesn’t really change on American cars. The Corvette engine of today is basically the same as what they were running in the 1950s with a push rod V8, but more refined, that is the American way of doing things.

“It’s an amazing evolution, people who started buying parts for their cars in the 1960s are now running garages for American cars, and they have been for 40 plus years.”