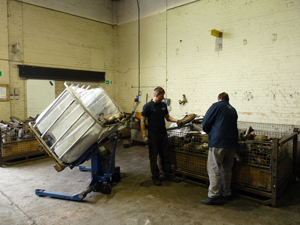 Refine Metals is a busy, thriving recycler, quietly tucked away in the picturesque Surrey Hills.

It collects catalytic converters on a daily basis from factors and scrap yards, decans them, weighs the contents, pays its suppliers a decent price and has the material refined into its precious constituents.

Refine has been going since 2005 and it’s jointly owned by Roger Buttle and its founder and Managing Director Ross Barnes.

We all know emissions-controlling technology contains precious metals – platinum, palladium and rhodium – but not all catalytic converters are created equal, say Barnes and Buttle.

While some offer a price simply based on weight, Refine is part of a band of more sophisticated recyclers that know more. It’s created its own database of hundreds of cats so it can more accurately identify what’s going to be inside when it’s opened.

Sometimes that means a yard or factor might get less than they would have expected for a cat they thought was laden with platinum, but sometimes they might get more. A lot more.

One derivative of a model’s cat might contain £10 worth of precious content and another £200. A lighter unit might have more precious metal inside it than a heavier one, you just can’t tell by chucking it on a set of kitchen scales.

Building up a knowledge from the early days is one of the key reasons that Refine has become one of the country’s foremost recyclers, one that can deal direct with the big boys in refining and get a strong price.

“We got right in at the infancy,” says Buttle, “so we’ve matured with the market. We’ve got the knowledge that other people haven’t got.”

Despite the expertise, it’s content with its coverage in the South East of the country and doesn’t harbor plans of UK-wide domination.

Concentrating on its corner like this means it can also offer quality customer service with daily collections.

“We offer a trade-only, highly professional service, but one that’s close to us,” says Barnes. “That should mean others can’t come in and better us on punctuality or price.

“We really value existing customers and offer the best prices and service to them. Some others might offer better prices to get new suppliers on board, but we take care of people on a longer term basis.

Complexity is something Refine has become comfortable with in recycling, but it’s also something that can be found at the origin of Barnes’ involvement in the aftermarket – collecting core for remanufacturing as Autoparts, a business that’s still going.

That was in 1994 and since then that company grew. Even so, Barnes had his concerns.

“I was worried about all of the cheap, white-boxed brand new product that was coming in from China. It wasn’t good enough to reman. I thought the market was going to disappear so I looked for other things. I wanted to divest.”

That’s where the profitable cat recycling came in, but the real bonus for Barnes is that it’s alongside reman, which he says is enjoying a real renaissance, not instead of it.

“The broadening of range and huge amount of part numbers means those making new parts can’t hope to research and develop them all.”

With a dozen, or many more alternators, available in a single model line-up, Barnes makes a good point, and both he and Buttle see the marketplace as rightly demanding good quality remanufacturers.

There are fewer people doing reman these days, that’s for sure, but the ones that are left are doing a quality job that’s well recognised by the sector, says Barnes.

It’s not just rotating electrics either, Autoparts buys electrics, turbos, EGR, pumps, clutches, flywheels – you name it, they probably have it.

Barnes reckons there’s 40 percent growth for Refine over the next two to three years. That could take it past £10 million in turnover.

Old parts are creating new value, some recycled, some remanufactured and Barnes is working out how to increase capacity.