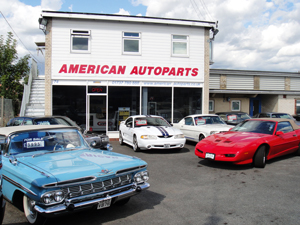 Mike Lintern recounts the tale of his journey from journalist to American hot-rod and vehicle specialist.

Arriving at American Autoparts in Redhill you are greeted by rows and rows of American muscle and classics gleaming in the sunlight waiting to take the fancy of the next collector. Two 1957 Chevy road cars with race engines were undergoing a renovation to return them to their former glory, while a mark two Ford Zephyr and a 1955 panel van are awaiting their turns to be restored.

Owner Mike Lintern explains that the business is still flourishing even though the price of fuel has seen a move away from using American vehicles everyday to only at weekends or on special occasions.

Lintern’s story begins back in the 1960s, when he took up the role as a junior reporter with the ambition of becoming an automotive journalist. His break into this sector actually came with Caravan magazine, where he worked his way up from Editorial Assistant to Assistant Editor for Link House Publications in Croydon.

“I was heavily into American drag racing and hot-rods,” he says. “And I came up with an idea for a magazine similar to Hot Rod magazine, which in its heyday in the 1970s and 1980s was the world’s second largest selling magazine in its sector. 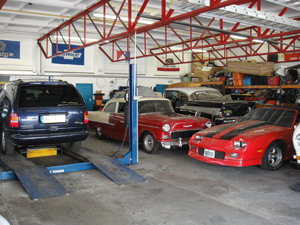 “I knew it would be specialised because in those days the interest in street-rods, drag racing, hot-rodding and American cars was a lot smaller than it is now. I made a dummy and called it Race and Custom Car. The Managing Director didn’t know anything about hot-rods or drag racing, so he took it home and showed it to his teenage son and just by chance his son was reading the American Car magazine, and he said that was what he’d want. The magazine got the go-ahead.”

It was launched as Custom Car magazine and saw Lintern do freelance work and cover drag race meets, where he also set up stalls selling the badges and stickers, from his new enterprise, alongside the magazine.

Lintern added: “It grew and grew, so we decided to open a small retail shop in Wallington, Surrey, which was going to sell all sorts of American orientated accessories and goodies. We quickly realised that this wasn’t going to sustain the rates on a shop though.”

The decision was made to expand its offering, and for the first time Lintern dabbled in spare parts for American vehicles, which included the addition of a trade-only counter.

A move to a bigger location in Thornton Heath, Croydon, soon followed and the increase in demand meant for the first time a workshop was connected directly to the business. Steve Thompson, a former chief technician at a GM dealership and Lintern’s future business partner, rented out the workshop at the back of the showroom building American Autoparts owned.

It was based in Thornton Heath from 1977 until 2006, when it moved to its current location in Redhill, where they have incorporated the garage under the same brand. He adds that while the new location is mainly on an industrial estate they get a lot of retail and email based sales, but the jewel in the crown is the repair and restoration side of the business.

Lintern adds: “The market and the kind of work we do has changed quite dramatically. We used to have a mix of American vehicles, so we didn’t know whether we would be servicing a regular run of the mill American saloon, a motorhome, a limo or an ambulance. Now the market is very much muscle cars, hot-rods and classics.

It is clear that over the years the focus of the business has shifted, while it still continues to hark back to its origins. The service and repair work has diminished with restoration work replacing it.

“There is less of a need to bring in American cars because they are not that distinctive anymore. There are some exceptions such as the high performance market, with the Mustangs, Corvettes, Camaros, but the numbers aren’t that big. There is a real resurgence in nostalgia. This means the hot-rod and the classic car scene in the UK is bigger than it has ever been. If you go to an American orientated car show, you would be amazed at the numbers, and that is what keeps us going.”