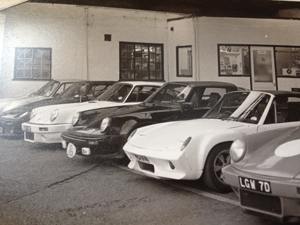 Mention a 1973 Porsche 2.7-litre Carrera RS or Autofarm and most people will associate either with Josh Sadler, a man who built his reputation based on his encyclopaedic knowledge of Porsches and 911s.

The link is so strong that new Directors Mike Wastie and Steve Wood who have succeeded Sadler are now facing the difficult task of maintaining the history and ethos which appeals to its customer base, while implementing changes to the business to keep it modern and relevant.

How the whole Autofarm story began is equally intriguing as the astounding depth of knowledge that Sadler himself gained of these quintessentially German cars came about more by chance than by design. It began back in 1971 when he and fellow Glacier Bearings colleague Steve Carr decided to go it alone and make a living for themselves. Finding themselves in a scrapyard focusing on insurance write-offs the pair set out looking for a vehicle they could repair and sell on for a profit, as Sadler goes on to explain.

“We knew nothing about the motor trade or how it worked, business-wise we were horrendously ignorant and distinctly green. We noticed a 1968 911 L come in with front end damage, and Steve said how about we jointly buy it, but we had already bought a damaged Lotus Elan and a glass fibre Reliant Scimitar. 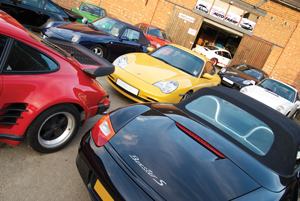 “We bought the 911, but I was uncertain about it, as I had only worked on British cars and ‘this was foreign’,” he chuckles. “And I wouldn’t have anything to do with anything foreign. But the quality of engineering was just in a different bracket. It was a detail engineered car, properly built.”
But a problem ultimately facing Sadler and Carr at the time was getting a replacement wing for this three-year-old 911. The issue arose because Porsche changed the design of the wing in 1969, which made finding a replacement wing for cars built before then incredibly difficult.

This meant going to Duisburg in Germany to find a replacement wing for the 911 L, where a chance meeting with a Porsche dealership owner’s son, who incidentally wanted to try out his English, pointed them in the direction of a firm called Terbernum Autoteile, which proved to be an eye opening experience.

“The son said ‘what you want to do is go down the road and see this outfit called Terbernum, because he has got some second hand bits’. Second hand bits for Porsches, there is no such thing surely?” said Sadler. “So we took his advice and the business really started when we walked in, as it had sorted racks of second-hand parts for Porsches.

“We sorted out the bits we needed to repair the L, and we came back and thought we could go in a van and buy loads of stuff and sell it on Exchange and Mart. And really that is where the business started; we finished up by buying a Transit van and making our own glass fibre panels, and selling a lot of wheels. We kind of grew up alongside the 1973 Carrera RS cars, and that was purely down to good luck more than business judgment.” 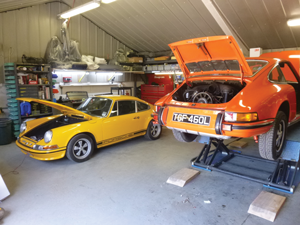 That was the start of Autofarm, and between 1973 and 1987, the business had a tour through Buckinghamshire, starting off in the leafy climbs of Ivor before finding itself making full use of an abandoned garage opposite Amersham Underground station.

In that time the business grew and grew, with Sadler and his partner Carr acquiring a RS prototype shell and 2.8-litre engine deemed surplus to requirements by Porsche, and it was during this period that Sadler describes as ‘our heyday’ as business boomed. Towards the end of the 1980s, Autofarm was diversified into a number of departments including a main workshop, project builds and metal workshop.

Sadler employed an ex-Mulliner panel beater to work in the metal workshop, but had problems keeping him busy, as paint and restoration work took far longer than the metal work. This period also saw the firm create a number of aftermarket and performance product lines with the main turnover generated from exhaust systems and glass fibre panels.

In 1986, the firm found new large premises in Tring and Sadler incorporated a new Suzuki and Saab franchised dealership on the 1.4-acre site. Although he believed this move would signal a new exciting era, unfortunately the timing could not have been worse, as he explained:
“The market started inflating in 1988 and wildly in 1989 and people were scrabbling for the 1989 5-speed 3.3-litre turbos and big premiums were being paid, but when the market collapsed in 1990, there was some serious pain around.

“When the recession came it caught us on the hop, and the operation was unsustainable, so I had no choice but to pull the plug. I took all the second hand stock and set-up in the sheds at home. A couple of the others joined me, and we operated out of sheds at home for a few of years.”
This marked the beginning of Autofarm 1973 Ltd, and in 1993, Sadler received a tip off about a farm in Bicester, where some renovated barns were awaiting some new tenants, and this has been the home of Autofarm ever since.

He added: “It is a brilliant site, but also slightly difficult, with us fitting into buildings rather than premises that are built to do the job, but we grew to 18 of us, then I had to cut back through the recession. You can’t stand still you have got to keep pushing forward and going for it.”

Planning for the future? 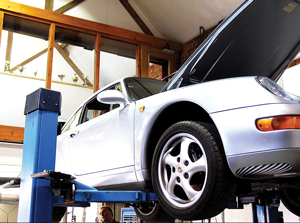 An issue that faces every business at some point is what does the future hold, and what succession plan is there for the business and its products or services to continue when the current owner decides to call it a day.

This is something that dawned upon Sadler, however earlier this year, he made his decision public that Autofarm will be taken over and its future secured by current employees Mike Wastie and Steve Wood.

He adds that since moving to Bicester in 1993 succession planning has always been at the top of his agenda, and after two years of behind-the-scenes work, with Wastie and Wood, the reigns have been officially handed over, although Sadler still remains an active part of the business through its car sales programme.

“It was a deal that fitted, and it made a lot of sense to hand it on to them,” said Sadler. “I tried to sell the business, but any money I made I went racing with, so the only investment around here was the reputation. For someone coming inside from the cold it is a little difficult to think that they can significantly benefit from the name.

“Life is about people at the end of the day, it is not about cars, and finding the right people is important, and Steve and Mikey work together really well as a partnership. Steve joined us a couple of years ago and is well able to run a business from the business end, and Mikey is well able to run the business from the engineering side, and he has always been on the classic side, so he knows that side of things.”

Steve Wood, Director at Autofarm, said that it had always been Sadler’s intention to pass the business on to Wastie, but Wastie had wanted somebody ‘to share the ride with’, adding:
“My wife said to me a few months ago, ‘everything you have done through your career has built to this point, this is it now you have all this experience to draw on lots of things’. And it is such a good, interesting business, has a lot of colour to it and hence that is why we are both here now.”
Wood’s remit is to try and drive more servicing, maintenance and repair work for the modern vehicles, to supplement the project car work that Autofarm has and broaden its appeal to the Porsche universe.

Meanwhile Wastie, who heads up the Projects department, said that his love for the business, the vehicles and more importantly the loving restorations are what have kept him at Autofarm from his days as an apprentice to now running the business, but it was a dream that he once had thought was out of reach.

“I could see what was going to happen and I thought someone is going to have to come in and take over the business,” he said. “I didn’t actually think for a moment it might actually be me. Over the last five years I have progressively been getting more and more involved with the management side, and then it dawned on me one day that I am already doing half of it.

“The most important thing was we didn’t want out with the old and in with the new. You speak to anybody, Autofarm is Josh Sadler, and if you say Josh Sadler, oh that is Autofarm. That is the brand, and what we now have got to do is try and remove Josh from the forefront of it, and he was around when the 70s cars were brand new, so we now have got to draw on his experience and knowledge. We want to continue what he started and keep the ethos behind it the same, and that is going to be really tough.”

The projects side of the business is large for Autofarm as it is where classic 911s come to either be restored to being factory fresh or alternatively turned into a dream machine.

“I love coming to work, I love what I do,” adds Wastie. “The fact that everyday and every project we do is different, your mind has got to be active all the time. Although a restoration is a restoration, everyone is different, you could have two cars brought off the line at the same time and 30 years on they could be in different conditions and how you approach them is different.

“I fell in love with the car the moment I got here, and started working on some of the cars – the noises, the smells in the car, and it spiraled out of control from there. Building the car is fun but getting to the end and the customer saying it has exceeded what they actually wanted before driving the car, for me, that is brilliant and that makes you feel you have done the job right.”

Autofarm has been around for over 40 years now, and although the business suffered in the early 90s, it has come back once again, and is basking in the booming classic car market, while the new partnership of Wastie and Wood has all but ensured that Sadler’s legacy may continue for many more years to come.