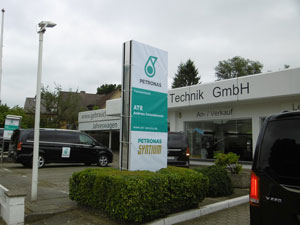 If garage owner Andreas Golembiewski was surprised about what was happening in his modest workshop one Thursday morning, he wasn’t showing it. Mind you, it can’t be every week that he has a current F1 car on one ramp and various top-end AMG-Mercedes cars on the others. In the same vein, it can’t be often that a F1 driver Nico Rosberg turns up to perform an impromptu oil change flanked by dozens of media and PR people.
The reason for all of this razzmatazz is that Automobile Technik Reparatur GmbH is the first garage to be signed up to a new garage network run by oil brand Petronas.
OK, a garage scheme on the continent might not sound like the most relevant case study for CAT magazine, but where Automobile Technik Reparatur stands out is that the Petronas Network Two is being rolled out in the UK at the same time. A chat with UK Head of Market Tony Lowe confirmed that the inaugural branch on these shores (a CV workshop) will receive the branding by the end of summer, followed by others in the coming months. The launch of the concept has come at a fortunate time – as a few weeks ago the Autocrew network (which was set up in the UK as a project between Bosch and Euro Car Parts) told its members it is to close. As ECP has exclusive rights to distribute Petronas oil in the UK (excluding bulk sales) it may be that former Autocrew garages may want the benefit of a new scheme that offers signage, a reduced rate on Bosch diagnostic equipment and so on – and has the added bonus of a brand that anyone with even a passing interest in F1 will recognise and will hopefully associate with a winning team. 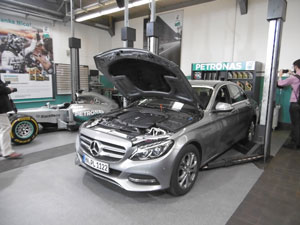 The German garage itself is clearly well-run and well-trusted in the local area, though the PR material from the oil company describing it as the ‘flagship’ outlet is a little wide of the mark as a four-bay workshop is standard among independents in Germany – perhaps a better description with a military metaphor might be the ‘vanguard’ as it is the first to try the new concept and branding out on an existing customer base.
Apart from the ramps, the garage has a fastidiously neat pegboard covered in tools and a number of pieces of Bosch-branded diagnostic equipment, including a brand-new 1234yf machine, hooked up to one of the AMG Mercs brought in for the event. A steel machine resembling a forecourt air compressor was built into a wall – but instead of Luft und Wasser, the machines four spring-coiled hoses have nozzles that dispense different grades of oil, of which we can find the correct type for any make and model via a small computer built into the machine.

Golembiewski is happy to diagnose and repair all makes, although he is known locally as a BMW and Mini specialist and he has certificates showing the workshop to be proficient in the service and repair of ZF/GM automatic gearboxes. Similar to most UK garages, Automobile Technik Reparatur derives a good amount of revenue from vehicle testing and associated repairs, and on days when the ramps are not clogged with racing cars and exotica no light vehicle will be turned away. Signs promote the fact that the business uses Bosch equipment, and apart from the new air-con machine, we noticed the firm also had a modern Bosch KTS diagnostic platform with a built-in oscilloscope. Throughput at the garage is high, with around 60-90 vehicles per week – although not every car needs such in-depth diagnosis of course.
At the front of the building, a small showroom houses a number of used cars, the sale of which makes up half of the company’s operating profits. “The workshop has been here for 18 years, but this is the most exciting time for us as we hope the marketing and strength of the brand will help move us forward,” he said.
For its part Petronas is riding high at the moment, as it is both the lead sponsor and major technical partner of the Mercedes AMG Petronas Formula One team, known as the Silver Arrows, which has dominated the podium for the last couple of seasons, due in no small part to team mates Nico Rosberg and Lewis Hamilton.