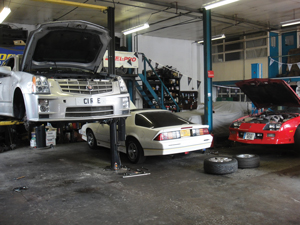 To be a specialist in American cars in the UK isn’t easy and having a great passion for them certainly helps.

His history is all about fixing many different V8s and V12s, ranging from the exotica of European supercars, to the tiny British sports cars housing huge engines through to the good ol’ American muscle.

Why American I hear you cry, well, I will let Gray explain: “The American car was the only real cars that gave me the buzz of motorcycling. That was the real thing behind it: the excitement of driving powerful cars and working on unusual vehicles.”

To be fair to Gray nothing is more unusual than the first car he worked on after finishing college in 1967.

“The first car I ever worked on was an AC Cobra, can you believe it,” said Gray. “I was 21 and this car was on the ramp for a service, and I went through it and changed everything. Back in those days you had to road test everything, and this was in Kensington, Chelsea. So I got in this car and drove it around for an hour in Kensington at 21 in this 1964 AC Cobra it was just unbelievable.” 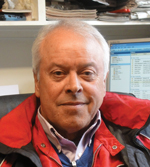 This opened the floodgates for Gray as he found himself working on everything from Lamborghinis right through to Morgans and Marcos.

Gray said: “My work was always very unusual and very varied and that was where the engineering side started. I worked on all sorts of cars and improvised and made bits up.

“I can’t say I was the most ingenious at this, but I worked with a lot of people who were very clever. That is why I can look at anything and see three angles on how to do that one job.”

In 1985, Gray decided that after many years running a number of different companies, he should start his own venture that would be a symbol of himself. Soon after Autopontiac was formed.

“I did a lot of work with Pontiac and it was getting quite popular because it was the Smokey and the Bandit era, and Knight Rider was on TV so Pontiac had quite a big image but nobody in the UK was doing it,” said Gray. “There were quite a few American car dealers and specialists but nobody was saying ‘I specialise in Trans Ams’.

“So I said was the Pontiac Firebird specialist. I knew nothing at the time, but I picked it up and I have probably turned myself into the most knowledgeable Pontiac person in this country.”

Gray’s decision to go for Pontiac is down to its subtle looks which differentiates itself from the Corvettes and Cadillacs, but also because Gray took it upon himself to prove that if done correctly Pontiacs are reliable.

His extensive knowledge base has proven to be invaluable to enthusiasts.

“There is nobody around with the knowledge. I started in 1967. When one of those cars comes down the road I can hear it if it is only running on seven cylinders instead of eight.

“I have ended up fixing cars over the phone for people because I recognise the way they go wrong from experience. But in 1988 a problem in an ‘86 car I knew nothing about required a diagnostic computer. So I became one of the first guys with a computer analyser after 1988.”

A large part of Autopontiac’s work now is restoration work, with Gray famed at building race engines, restoring gearboxes, axles and suspensions too.

That amount of specialist knowledge is sure to win a race or two.