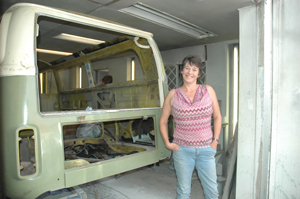 Caroline Lake about her fascination with engines from an early age and how it led to her decision to set up a garage targeting woman customers in particular.

Lake has her hands full. Her phone is ringing and there’s a stream of cars with maladies coming to the workshop on the outskirts of Wymondham, Norfolk.

However, it wasn’t always like this since Lake opened the garage in 2006. Although an experienced technician and MOT tester this was the first business that she’d run by herself – and initially found it to be a daunting prospect.

Nonetheless, her business model was clear. Yes this would be an all-makes independent garage, but it would also be a place where all the general public, and especially women, would be able to bring their vehicles without feeling patronised. “Taking your car to a garage shouldn’t be a scary prospect. Why should women feel scared to go to a garage?,” she said. “A lot of my customers say that they would rather visit the dentist than book their car into a traditional garage – and from my experience franchised dealers can be worse than independents.”

There is certainly nothing like the dentist’s waiting room at Caroline’s Cars, and the customer experience is certainly a little different to most workshops. While it’s true that the waiting room, (complete with Victorian piano brush painted a shocking pink to match the similarly coloured walls) won’t be to everyone’s taste, Lake does take time to greet every customer personally and is only too happy to explain what needs to be done and why, as well as showing the customer the workshop if required. The site also boasts a bodyshop and spray booth, which at the time of our visit had the hulking shell of a VW Camper being rubbed down.

Like most people in the garage trade, Lake had a fascination with engines from a very early age. Her father would tinker with lawnmowers and rotorvators as well as the family’s cars. “Even when I was tiny I always wanted to ‘make the cars better’,” recalls Lake. “Hearing that noise when a car won’t start, with the starter’s whining getting slower and slower was horrible to me.” As a teenager, she picked up an old Triumph Dolomite that had failed the MOT, and with the help of her father and a workshop manual, she put it back on the road. Following this, she got an unpaid ‘job’ in a garage, but it took four years of sweeping up before she was allowed to touch the cars. Once she was on the tools, she proved herself as a dexterous and natural mechanic, attaining various qualifications and becoming one of only half a dozen female MOT testers in the country. It was then a matter of biding her time 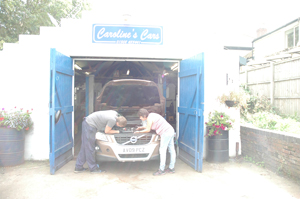 Apart from all-makes servicing, MOTs and repairs Lake also offers a number of evening courses to teach (primarily) women about the way that cars work and how to perform routine checks and basic maintenance. “A lot of women don’t have a background where they were ever encouraged to do anything with cars. Sometimes they are not aware of the most basic elements, such as where the bonnet catch is”, she says, adding that the classes have been very well received in the local community.

Teaching the classes inspired her to write a book about car care and maintenance. The Haynes Women’s Car DIY manual provides readers with advice on all areas of owning, maintaining and caring for their cars, with colour step-by-step photos showing how to carry out general procedures. It also explains what goes on with servicing and MOTs, so the reader has a clearer idea of what happens at their local garage. “I want this book to not only give women the power to make educated and informed decisions about their cars, but to also get their hands dirty and get under the bonnet,” says Lake. “Cars aren’t rocket science and it is about time that women realised that they have all the necessary skills to do it well, but they are discouraged from entering the profession,” she said, adding that the problem starts in schools. “ Girls are encouraged to become hairdressers or beauticians,” she says adding with a smile, “Well, just take a look at my nails!”

Writing the book seemed daunting at first, but once Lake got started on her favourite subject she was in her element. “I was asked to produce 40,000 words, which seemed a huge amount. By the time I’d finished, I’d written 60,000 and had to scale back,” she says, joking that there is enough left-over material to fill a sequel.

One of the subjects that Lake is most passionate about is the need to regulate and licence the industry. “Anyone – whether it is your auntie or my uncle or anybody else can open a garage and work on cars. It’s frightening and wrong,” she says. “To give a pill to a cat you need to be a qualified vet and have studied animal medicine or whatever… so why don’t the government legislate on this?” Lake sees the need to professionalise the industry through regulation as being part of making a visit to a garage a more welcoming experience.

Plans for the future include franchising the ‘concept’, initially across East Anglia. Lake has written a syllabus for her DIY classes and these would be relatively simple to replicate. However, the ultimate aim would be to have new branches of the garage opening up, spreading the message of highly trained staff and good customer service. Let’s hope we see some new outlets soon.