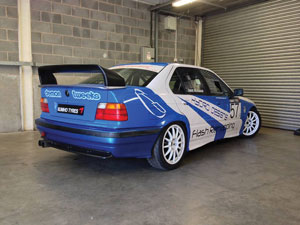 When you think of remapping a car’s ECU you think of tweaking the power output and gaining more power from the engine. However, David Lewis, Technical Director of Flash Remapping, says there is more than meets the eye when it comes to tuning up a vehicle.

Having started the business eight years ago and remapped more than 4500 cars in that time, Lewis has built up an enviable knowledge base that many other Viezu dealers use on a daily basis. Even so, he is adamant to point out that actually this doesn’t make the job any easier to do, as he explains: “On a daily basis it seems that you are on a constant learning curve. These two Saabs, which are basically a Vauxhall Vectra underneath, came in, and I knew from reading the ECU via the OBD there was nothing but a tiny bit of mapping data on. So I jacked the Saab up to take the ECU out, and every Vectra’s ECU is in the wheel arch.

“So I took the wheel and the wheel arch lining off, and the ECU wasn’t there. So I went hunting for it and it was on the other side, so I was thinking why is it there? And it is the same everyday. You will see things that you have never seen before.”

He says that a great deal of experience and getting hands on with the vehicle is what is needed to survive today as the golden period of flash remapping is over.

“In 2000 every car came with a 16 pin diagnostic port, so you could communicate and flash a program to the ECU using this port. Everything was really easy, and loads of people got into the business. Then in March 2009 the ECUs went from single core to dual core to triple core processors, and manufacturers knowing how many cars were being tuned put encryption on the ECUs.

“We could still read and write them from the OBD but the car just wouldn’t start, and we had to figure a way of getting around that. Now we’re back to taking the ECU out. Has it got more difficult? Not really, but we have been through a golden period where it was really easy.”

While vehicle manufacturers’ encryption software has made life trickier, it appears the remapping game has changed completely, as now economy maps are becoming more popular. Not just with private customers but also with fleet customers as Viezu, the supplier of the engine maps Lewis uses, has retuned all the BT vans on the road with the aim of making fuel cost savings.

He added: “I would say 50 percent of what we do is for fuel economy. That is the big news for the tuning companies: Fleets of commercial vehicles being tuned for better economy.

“With the BT vans, the tuning made a 10 to 15 percent fuel economy saving around town and out in the countryside, and they were vehicles already restricted to 70mph. So we had less scope, but they are saving a fuel worth about £4 million a year, and once it’s mapped, it’s mapped. It’s not like tuning of old where you would have it tuned once a year.”

There is still a market for performance remapping as owners look to gain more power from their vehicle, as Lewis recalls recent projects including tuning a BMW for a race series, improving an Aston Martin’s performance by tweaking the throttle map and giving a boisterous Nissan GTR rolling launch control. But he says that there is still a misconception amongst the market over what the result of performance is.

Many believe the top line bhp output gain is the benchmark for remapping, but Lewis explains that widening the powerband is where the biggest gains can be made, giving the car more power in more areas. One example was Fiat 500 Abarth that he remapped, and while the top bhp figure remained the same, the Fiat gained 35bhp in the mid-range between 2000 and 4500rpm.

“It is a little bit of a misconception really. If you take a 2.0-litre 220bhp Subaru Impreza WRX, the way we map that car would be much faster than someone who has added 70bhp to it’s peak output,” says Lewis. “If you have someone who maps it for the peak power output, ours would be faster driving it around streets and normally, but people don’t seem to understand that.”