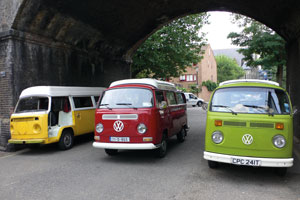 Many UK garages claim to be specialists in air-cooled Volkswagen vehicles. But one place you don’t expect to unearth a classic VW haven is under the railway arches by Ladbroke Grove underground station, which is where Jack’s Garage’s owner Joseph Salama and his team are working attentively and lovingly on a myriad of camper vans, Beetles and Karmann Ghias. The business started in 1995, and Salama took ownership in 2007.

His love of for old ‘Vee Dubs’ and campers started at a very early age. “When I was six months old my old man bought a Volkswagen camper van and we emigrated from Southend down to Tripoli in Libya in it. That is where the love started.”

The repeat business Jack’s gets speaks volumes about the care staff exhibit for the vehicles. Salama says that it is their reputation that brings in new business and that actually there is no real need to advertise or promote Jack’s at shows because work coming through the door is plentiful.

“Space is the only concern being located under a railway arch, but it is central London and it will always be a problem. However we can accommodate between 20-25 cars on site, and we have an underground car park where we rent spaces.”

Even though the core work Jack’s receives is mainly maintenance and restoration work for air-cooled models, the team also welcomes modern VWs into the garage. Sourcing replacement parts for air-cooled models – particularly good quality ones to fit on to restoration project vehicles – can be tricky. One option is to find and recondition second hand original parts, or alternatively searching the international aftermarket to find the relevant part.

“You can get new parts, like body panels, which are readily available but are not always the best quality stuff. Sometimes we have to do some modifications to the aftermarket panels to make them fit, but it depends on who made the panel and where they have come from.

“There is a guy in Colombia who does split-screen parts and he is sold out for up to a year in advance, because his stuff is quality, real quality. There is a large variance in the quality of the parts. GSF will supply floor pans for Beetles, but the cheap ones you can get for £60 will last for a year or two years tops, while the German quality ones will last five to ten years, but cost four times the amount.” 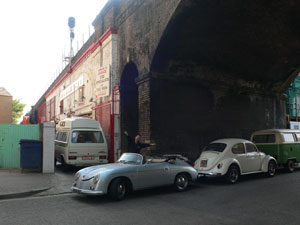 Salama says that the UK has a buoyant air-cooled and water-cooled camper van market, with more air-cooled vehicles being brought over to the UK. Jack’s has serviced and repaired vehicles imported from America, South Africa, Australia and even Poland and Italy, but he warns that the work involved in meeting MOT requirements on registration can cause the cost to sky-rocket.

A rather unusual service that Jack’s offers for customers looking at buying a classic VW is a 600-point assessment, which will highlight any issues that the vehicle may have before purchase, as Salama explains:

“We do a pre-purchase inspection, so just before they spend £5,000 to £10,000 or £30,000 to 40,000, we do an extensive report. We check out everything on the engine, the bodywork, the steering, the carburettors, electrical system, locks. It helps the buyer make an informed decision.”

Using many years of expertise he advises to steer clear of the Brazilian-made T2s, also known as the VW Kombi, as some of its customers have experienced issues that have never plagued the originals.

Salama comments: “They were built until recently, but the only good thing is the Polo engine in them. It is simply down to build quality – it is not German, it is Brazilian. Some of the ones we have seen needed new engines or new heads and the build quality reminiscent of a 1960s van not a modern vehicle.”