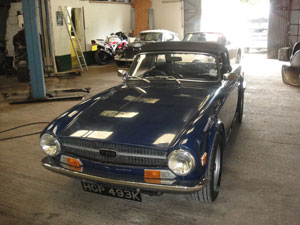 A business is often spawned from the opportunity presented by a new opening in the market. Infrequently though, such opportunities are created by coincidence as was the case for John Yarnell, Director of JY Classics. He was made redundant from his sales job in 1996, which also saw his company car being returned to his employers, and therefore he needed some wheels before getting on the job hunt. Yarnell picks up the story.

“I went out and got myself a Triumph Spitfire because I had one when I was 19. I did an awful job restoring it. I think I used 14 aerosol cans all of which were different colours of French blue.

“I wheeled it out after a month of putting it all back together again and sold it for a profit of £250. It wasn’t very much, but I wasn’t working for anybody else so I was perfectly happy to do another one, so I did another one, and another one, and in the end I upset the neighbours so much I had to go and get myself a workshop.”

Yarnell moved to a workshop the size of a double length garage on an industrial estate and carried on repairing and restoring Triumphs, and it was here that he started building up a client base formed of people who bought the restored cars and returning to have their car maintained. Eventually, with the business bursting at the seams JY Classics expanded into seven other units on the site, but the location wasn’t giving the professional image that the clients desired, as he explains:

“Where we were before we were suffering from a lack of room and disjointed working practices, because we had to go from one unit to the other, and you spent half the time walking between the buildings and not getting any work done. Now it is more civilised and the customers prefer it, and it is more professional and user friendly.

“When I was unable to get to my workshop when there was snow on the ground, I used to be able to park at our current site, so I got to know the guy who owned this farm and we did a deal to get the Romney building and the one next door. 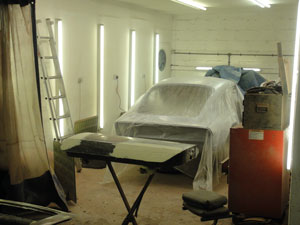 “The ex-MoD super Romney building is where all the mechanical work is done. We also now have a bodyshop and spraybooth, which used to be a skateboarding halfpipe and a soundproofed music room, as a dedicated area where we can do priming, prepping, panel replacement and proper restoration work.

“The move has certainly helped us boost our image, and ensuring repeat business from people with the more high value models like the TR5s and TR6s. It has certainly raised our profile just being here.”

JY Classics specialises in the restoration of Triumph Heralds, Vitesses, GT6s and TRs, with the demand for work on the latter continually growing. As a result Yarnell has had to develop a number of new skills including welding, panel fabrication, prepping, priming, painting and refinishing skills to ensure the cars leave his workshop looking factory fresh.

However, JY Classics aims to ensure each vehicle leaves in better condition than it did from the factory originally. One area that Yarnell has a keen eye for is the panel gaps on the Triumphs.

“We like to get things right, so having a decent paint finish, a nice panel gap, and you can get a bit fussy, but as the years have rolled by these tasks have become easier because we know where to go to get a panel gap right, we know where to attack.

“Some Triumphs had the most horrendous door gaps. There is one picture I have got where there are nine mid-60s Spitfires on the back of a transporter and you look at the ones on the top and you can see the panel gaps are hideous and noticeably atrocious.”

As the Triumph TR work accounts for 50 percent of JY Classics work and the diary booked up until January 2016, the next step for the garage is to increase its output and expand its staff in the near future.