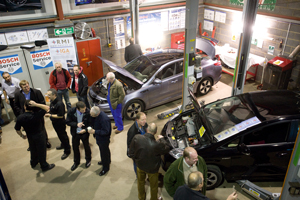 Paul Killingsworth takes training seriously and has invested in his knowledge and technical gear to makes his workshop Rolls Royce-standard.

When he first started as a 16-year-old apprentice with Toyota he was taught by an ex-Rolls Royce technician.

It isn’t really much of an exaggeration, if any, to consider his workshop, PK Automotive a Rolls Royce-standard independent.

It’s immediately obvious when you turn up at the Lincoln site that Killingsworth is very switched on, very focused on customer service and has an eagle’s eye for detail.

Despite being next door to a large building site – Killingsworth did his research when he chose the spot four years ago and knew a large supermarket, with lots of potential trade, was going to go up – it’s spotless.

Nevertheless, Killingsworth apologises for the ‘mess’ around his dynonometer, an impressive piece of kit that you certainly don’t see in many workshops. Some plastic crates are placed at its four corners to protect control units from the 140 guests who attended a function at his garage the previous night.

Local MPs, the Institute of the Motor Industry, the Independent Garage Association, other local garages and breakdown services were all at the event which received funding from the UK Commission for Employment and Skills.

“It was a very good evening,” he says, “Lots of people, good support. And the fish and chips were great.”

The IGA did some hybrid training and the IMI talked about the excellent payback that workshops can expect from properly selected and supported apprentices.

All very highbrow, but nothing less than Killingsworth, or his team, would expect. Having run up the ranks as a trainer for 17 years, with VAG, Mazda, Ford and Renault, Killingsworth has more than 30 years experience in total and has also worked with the AA, RAC and Bentley as a troubleshooter.

As a former apprentice himself he’s passionate about what they can offer a business. While one trainee unfortunately went off the rails a little, the others have been highly successful, including the recent addition of a 16-year-old female technician called Lois, and another is planned for 2014.

“Anybody that says that they don’t earn their money isn’t doing it right,” he says. “And if they left, why did they leave? Did you give them a pay rise?

“If you want to keep your staff, you’ve got to pay them what they’re worth.”

A Bosch Car Service Centre and Delphi Diagnostic Centre, Killingsworth has spent decades building up his knowledge and wardrobe of technical gear so he can cope with the electric and diagnostic jobs that leave others, including franchises, scratching their heads.

This stands his business, and his apprentices and team, in very good stead as besides the general service, maintenance and repair work PK Automotive now also counts more than 130 garages in the area as its customers.

“The electric and diagnostic work is the backbone of the business – service, maintenance and repair came on the back of it.”

A forensic attention to detail is evident in the way in which each job is approached.

Records of each step of each job are kept electronically so that if something goes wrong after a job the fault can be more easily traced. As other garages will know, it’s often not the workshop’s fault, and a web of 22 CCTV cameras covering the site has also helped brush off claims for damage and support PK in warranty disputes.

There’s a lot of Bosch branding about the place, but Trust My Garage and Motorcodes also feature. “We joined most of them to give the consumer confidence. It’s the same with parts. We give them a choice, but we explain the difference.”

The ECP right next door to PK supplies some 50 percent of its parts and Killingsworth is happy with the quality of anything he receives. There is an issue with customers coming in with their own parts to fit, however. Like many garages he’ll do the work, but he’ll explain that if something goes wrong with the part, it will mean more labour and he won’t underwrite the part.

Killingsworth is positive about the future: “The trade often thinks the industry is on its knees, but it’s not. We started in July 2007 as two men, and within a month we couldn’t answer the phone.