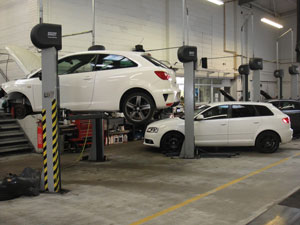 From the age of 16 Steve worked at HR Owen Audi dealership working his way up eventually becoming one of the first group of 40 technicians to be chosen by Audi to be put forward for the master technician accreditation.

Wife Jane came from a media background and ran her own property finding business, but in 2007 the pair opened Russell Automotive Centre a mile from the old Audi dealership that Steve used to work at.

“I said what we should do is have our own garage. Why are we giving your skills for other people to make money from? We should make our own money,” remembers Jane.

They decided they should make use of Steve’s face in marketing material as many Audi and VW drivers in the local area knew him for his expertise as a Master Technician at HR Owen Audi.

“Steve’s face was local to the Audi drivers, so this location was ideal. Our slogan was ‘Steve Russell is back!’

“Customers knew who he was, and they were really trusting in him so they started coming to us.”

The rise of Russell’s hasn’t gone unnoticed, with the business picking up a hatful of awards throughout its seven year existence, including being seven-time winners of the Best Independent Audi Service Provider by Audi Driver Magazine, winning the 2009 Best New Business at the North and West London Business Awards and Motor Trader’s 2014 Independent Garage of the Year.

And Jane and Steve have received individual acknowledgement for their business prowess, with Steve regularly appearing on a panel for Audi Driver International’s show and his opinion sought by many automotive journalists. While Jane was shortlisted for Entrepreneur of the Year at the London Business Awards in 2010, before making the first ever top 50 list of part-time leaders published by the Financial Times.

Despite all these accolades, Russell Automotive Centre is not resting on its laurels and has looked at how it can build and extend its revenue streams, including making life more convenient for customers using the garage and adding Bentley to the marques it specialises in.

But the biggest addition to the business is the introduction of sister company Garage Express, that focuses on all the other makes and models that aren’t part of the VAG group to extend their revenue stream, as Jane explains:

“We thought we were missing a trick, so we opened up Garage Express which is our second garage. It was really important to us to have different teams of technicians working in both garages, as they are different entities, but sharing the same space. So we can work on all other makes and models under our sister company Garage Express and not weaken the brand of VAG specialisms which is our core business.”

The next steps for Russell’s are plentiful with the additions of Porsche, Lamborghini and even Bugatti all potentially on the horizon, while exploring the possibility of going into car sales too. Their Garage Express has also been picked to be part of the newly formed Independent Garage Cooperative, which allows fleets access to a number of selected independent garages nationwide.

Jane adds: “We can offer one fixed contract rate for all these fleets across the UK and service all these vehicles in our area. It is really exciting and I think it will shake up the fleet industry, it is a massive development. It gives fleet companies much more choice and helps cut out the middle men. At the moment there are only 120 garages and they hope to have 200 onboard by the end of July. And we are already getting jobs through from people in the North, quoting us, so it is already working.”