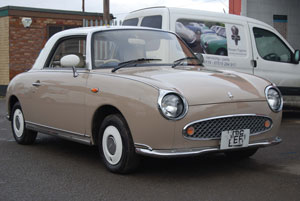 The chic Nissan Figaro is a wonderful yet nostalgic sight on the roads and is based partly on the Nissan Micra. It was originally available in only four colours and one specification.

Each of the 20,000 Figaros that rolled off the production line had the same three-speed automatic gearbox, air conditioning, electric windows and CD player among other features.

However, keeping these small cars on the road is no easy feat as Toby Brooks, Owner of The Figaro Shop, will testify, as the car is prone to rust among other things. But this garage is also well versed in making these cars a little more personal.

Brooks originally got into Figaros from simply restoring one, and his love for the little car took off and developed into a business as he explains:

“There is that feeling you get with restorations when someone comes to pick the car up and cries because they like it so much, you can’t beat that. 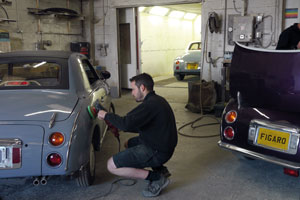 “It started off with me building one car a month for a client and it went on from there, as people started seeing the work we did, they started wanting parts and the work done.

“At the time I thought the Figaros that people were doing, weren’t good enough and bodged together. I just looked at them and thought we could do a better job and we did, and built a reputation for that.

“We are quite lucky that we get to do some really nice builds now, and generally we have quite a long waiting list for people who want us to build a car for them. We have had around a six month waiting list for the last four or five years.”

The Figaro Shop has become renowned for its bespoke restorations. Not only can the owner request the colour of the body and the hood to be changed, they can request bespoke leather upholstery, a specially developed Clarion radio with Bluetooth and a USB port, and even heated seats. Brooks adds that because the Figaros all had the same specifications, customers looking to restore their car will usually look to give the car a personal touch. 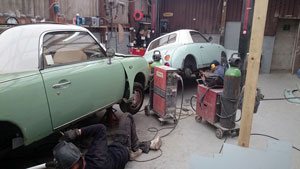 “People want to make them their own. It tends to be variations of the same features, trimming the seats, the upholstery, sewing initials into the headrests, or changing the colour of the hood that type of thing,” he says.

Having bodyshop facilities in-house means that the garage has also been able to take on Figaro crash repair work from insurance companies, which has led to additional work on other damaged vehicles as well. Brooks says that this work fits perfectly within the business as they already have the expertise and equipment to do the job, adding that other bodyshops would struggle to source and fit replacement parts for the Figaros as they can be quite scarce in some instances.

On-site is a large collection of donor cars and parts alongside new and OE parts, which keeps the garage supplied with spares and also supplements its mail order business.

Brooks explains: “We can supply almost every part for the Figaros, with a 50-50 split between new and used parts. We build engines in-house and some are sent out through mail order as well. Other parts are made for us, such as the turbos, which come from Turbo Technics. It allows us to corner the market. 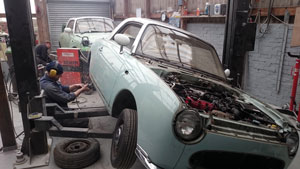 “It is just so useful to have parts on site, because we are breaking the accident repair ones down and it ensures we have the right parts making the building more efficient and allows us to boost our profits from selling parts too. We sell parts all over the world, and it is surprising that we seem to sell a lot to Korea, as they are close to Japan and China
where a lot of the parts are manufactured. I think a lot of it is down to specialist knowledge and a lot of people ring up because they have questions that lead to the sale.”

The Figaro Shop is positioning itself perfectly to deal with the inevitable boom that will envelop this Japanese classic car, and when CAT visited the garage, it had just moved into a new building allowing it to streamline its restoration process. The future is looking bright for the garage.