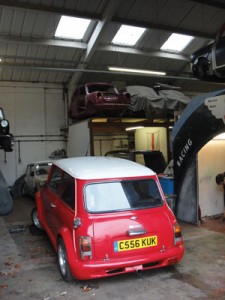 Restoration work is a very tough job, as it can be painstakingly slow and invariably is never as simple as you first imagine. To succeed in such a field you need to have a genuine passion for what you do.

At The Real Mini Company that desire to return a Mini to its former glory is evident and becomes clearer when you meet owner Daniel Budd in person.

His life has always featured a Mini, with his parents owning one when he was growing up, to racing them from the tender age of ten. Even today he, his brother and father all race the little car competitively.

The company started when Budd had £600 in his pocket and a desire to work on something he loved. He paid up front for a three month lease of a commercial unit in Henley and proceeded to valet and service cars, while holding down two other jobs as a courier and in a factory to support his dream, his mortgage, partner and newly born child.

Budd explains that it was the two Minis in his garage that gave him the breakthrough he was looking for:

“I have always been known for Minis, so when people saw my road and race car in there, they started to ask about servicing their Minis. I then bid on a Japanese Mini through a Japanese auction site. It took a few months to come over, but it was immaculate. I didn’t realise that actually there are more Minis in Japan than there are in the UK.

“I couldn’t believe how clean it was. All of our Minis were rusting because of all the salt on the road. So I sold it, made good money on it and bought two more. We became known for importing Minis from Japan. Then I had people saying ‘can you service mine?’” Budd got in a panel beater to work with the rusty British Minis that people brought in and the business took off from there.

The company has evolved significantly since and now focuses on restoring classic Minis, which is based solely on the buzz of being able to give a car a new lease of life, as he explains:

“I can show you pictures of some cars being literally dragged in, and then they go and win a show the next year. It was a hobby to begin with, to have a car to go to the show in and one to race. Now it has taken over my whole life.

“It just happened that the call for Mini restoration was so big. And when the Mini ceased production in 2001 the value of the old classic Minis just went up. Whereas before they were considered throwaway, now some of the cars in here are worth in excess of £30,000.” 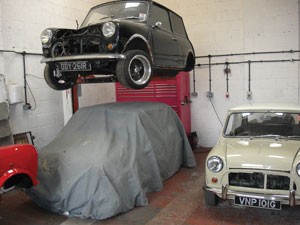 This interest has seen the company book in enough work to see them through at least the next 12 months. Due to the long-lead time needed to restore a car, it introduced a pay-as-you-go plan which allows customers to pay off the bill gradually, Budd’s team work on a number of vehicles at the same time and this ensures a regular cash flow.

But even Budd admits that while this system sits well with customers, it is the skills of electrical expert Steve and fabricator Les that are behind the company’s strong reputation.

Budd says: “I would not be in business without the two people in the workshop. Steve can wire anything, his preparation is fantastic, and the welding work Les does is definitely key with his skills.” Les was a former British Leyland apprentice who worked on the original Mini production line. Budd found Les living locally and unemployed. He says: “How that man could ever be out of work I will never know, I just wish I met him 20 years ago. I just wish I had half of his know-how.”

Combining expert knowledge, a sound business plan and the strong demand for classic Minis Budd’s firm will continue to thrive. 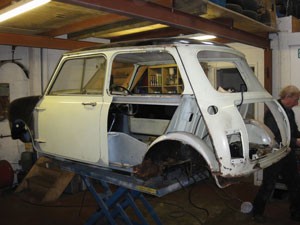