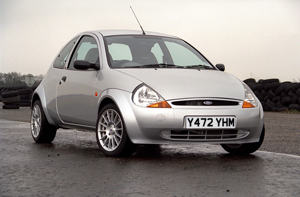 Carrying on the Inside Line series, we move on from looking at the BMW 1 Series and turn our attention to the Ford Ka. Now in its second generation, this car remains a firm favourite with those wanting an entry-level car to run around in a town or city, or as a first vehicle.

In this issue we are focusing on the first generation Ka which entered the market back in 1996 as a budget city car. A testament to its success is its longevity, with huge numbers sold for over a decade until it was replaced in 2009 with an updated model.

The baby Ford was an instant hit. Basic and equipped with very few features or luxuries, it was ideal for students and those looking to keep their costs down as it was cheap to own and run.

Despite the focus on economy, the Ka was still a fun car to drive and with good handling characteristics.

The Ford was launched with one powerplant a 1.3-litre petrol engine producing between 59 and 69bhp. Those lucky enough to buy either the SportKa or StreetKa were later treated to a 1.6-litre engine producing 93bhp.  Although the Ford has a small variety of engine options and has been made on a budget, it has provided technicians with a few electrical challenges.

Next month we’ll be looking at the Peugeot 107, Citroën C1 and Toyota Aygo, so if you have expertise and insight to share, we would love to hear from you. To get your advice included contact hemal.mistry@haymarket.com or peter.lawton@haymarket.com

Click below to see technical contributions on the Ford Ka from:

Cambiare – covers a number of issues with the Ford

CES – covers a number of issues with the Ka

Corteco – looks at the suspension system on the Ka

Suplex – explains the suspension variations on the Ka, StreetKa and SportKa