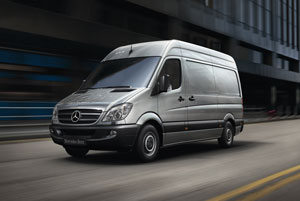 Once again we feature another light commercial vehicle in the shape of the Mercedes Sprinter.

The second generation van is a common sight on the roads, even though this generation has had two facelifts, and comes in various guises including a fearsome 4×4 version.

The vans were first introduced into the UK market in 1995 to replace the ageing Mercedes TN, as the tri-pointed star went head-to-head with Ford, Vauxhall, Renault and Volkswagen.

The second gen was launched with a range of powerplants, currently including a 3.0-litre V6 petrol and 2.1- and 3.0-litre diesel engines.

These engines can be combined with a six-speed manual or five- or seven-speed automatic gearboxes which along with the increase in technology have provided some additional challenges for the aftermarket.

Next month we’ll be looking at Japanese performance superstar the Nissan Skyline R32/R33/R34, so wherever you work in the aftermarket if you have insight to share, we would be delighted to hear from you. To get your advice included contact hemal.mistry@haymarket.com.

Click below to see technical contributions on the Mercedes Sprinter from:

Autoelectro – analysing issues with the starter motor on the Sprinter

Comma – discusses the importance of servicing the fluids and lubricants

Remy – looks at issues with the Sprinter’s steering gaiter

Schaeffler – explores common issues with clutches, bearings and belts on the Sprinter