Stephen Trulock explains Prestolite’s diverse UK operation and why it has the perfect business model. Rotating electrics are a fascinating product type with the amount of power they are expected to produce especially in the heavy-duty sector, including buses, trucks, plant and military vehicles.

Prestolite, with its UK office and plant based in Middlesex, have OE contracts with Alexander Dennis and Wrightbus, and produce the starter motor for the new bus for London, affectionately known as the Boris Bus.

“Prestolite used to have a battery company, a DC motor division, an ignition division. We used to make distributors and even aircraft parts.

“I was with a customer in Malaysia, and we were early for our appointment, so he took me to the aircraft museum, and it was there going through all these light aircraft that you started spotting Prestolite dynamos on them.

“We still get requests every week for all this stuff, and now we refer them onto those who have the business. There is Prestolite Motors Limited, who specialise in DC motors. There is a company called Prestolite Wire who sell cable, but we decided to go down the route of starters and alternators, and that is all we do these days. There are legacy products that we still do, but we wouldn’t do them for new customers, only for existing business. We have chosen to focus on our core business, otherwise we would have been diverted all over the place.”

Trulock says that the plants in China are the jewel in the crown for the company.

The three factories in and around Beijing are part of a joint venture between parent company Opheonix and Chinese supplier Broad Ocean.

Trulock admits that customers are still sceptical about parts manufactured in China, but joint ventures are now commonplace throughout China, and he points out why having facilities across the world producing parts is essential for a global business.

“The thing with all these sites is that the import tariff is very high, for example in India it is 28 percent. The key to a successful business is local manufacturing. We are not opening factories to make cheaper parts for us. We are opening a factory in India to make OE for the local market.”

He goes on to say while the first facility in Beijing has more than 1350 employees and the second was developed to deal with an overrun from the first, the third facility, which opened in 2012 and is 23,500 sqft, only has 110 employees as most of the production line is robotic. 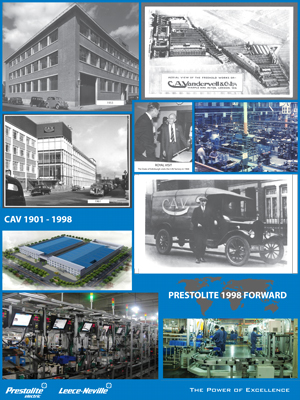 Its first entry into the UK market was back in 1988 when the American firm bought Butec from British Leyland, including its facility in Leyland, Lancashire, and in 1998 it went one further and bought the heavy-duty side of Lucas, known as CAV.

The CAV plant was located in the back streets of Shepherd’s Bush, not far from Loftus Road home to Queens Park Rangers. Trulock explains his first encounter with the facility more than 11 years ago.

“All of CAV was moved here to Greenford, but when I moved here 11 years ago we had a factory in Acton, Shepherd’s Bush for original equipment and the business in Leyland which was the aftermarket side. Both were originally factories, but most of the manufacturing had moved down to Acton, with a little bit still going on in Leyland, but it was predominantly warehousing and remanufacturing.

“I remember going for my interview at the Acton site. When I got to Lardon Road I remember thinking ‘this can’t be right’,” he said. “It is a residential road with speed humps, I continue to drive down this road and then bang out of nowhere is this massive factory.

“When Prestolite bought the factory, more than half of the factory was building diesel parts. There was also a military contract for large 12 cylinder in-line pumps that had a year to run. Delphi said to us there was no point moving it elsewhere because the staff won’t move and the nearest place they had was in the Midlands. They said you continue manufacturing it and when it is gone, it is gone. That was supposed to last a year, but it actually lasted five and half years.”

Back in the 1990s Prestolite’s operation had well over 6000 employees but over time the OE work at Acton and the aftermarket operations in Leyland got condensed down and moved to Greenford where the UK business is based today.

Trulock explains that although the facility is far smaller today than in the past, it doesn’t stop the plant producing and restoring units across the rotating electrics spectrum.

From the facility in Greenford, Prestolite distributes stock across the world with pallets being put together for delivery all over Europe. Trulock adds that its warehouse can stock more than £6 million worth of stock ranging from fast moving and small applications through to large starters and alternators and bulk stock for OE contracts.

Prestolite has a number of small product lines producing a small run of alternators for old yet popular applications using the equipment from the old CAV facility. They also carry out overhaul work on military and rail products. 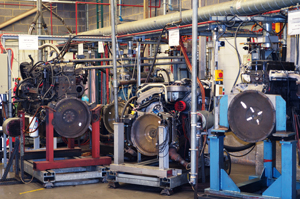 An area of importance for the company is testing, and Prestolite has designated zones dedicated to testing equipment it builds for across its many sectors. They have a number of bays where warranty claims are checked, which Trulock says have a 40 percent no-fault-found rate on all returns.

There is also a unit specially designed to test military equipment as he explains: “When we build or overhaul a military unit, we test it against every signal suppression method in a sealed room. It is important to check because if an enemy unit can block your communications, they don’t need to fire a gun because they have already outwitted you.”

It also has the facility to undertake a hot and cold test with its temperature chambers, salt spray test and test the longevity of the starters and alternators, with a range of dynos.

“The only way to test a starter motor is to put it on a vehicle and let it run for two years,” he adds. “Obviously we haven’t got two years to wait, but we are able to endurance test starters and alternators in two to three weeks. The endurance test we do for the aftermarket is 15,000 starts in two weeks, so the engine will start every 30 seconds. There is also an overrun on the clutch where it holds it in three seconds longer to put extra pressure on the clutch, because we are looking to make it fail.

“For OE we go to 35,000 starts but for stop-start it’s more than that. We test our own products, the competition, and we test new products we are looking to bring into the aftermarket in this way.”

“To test an alternator we let it run for so many hours. But we also load bank. That involves working the alternator at 30 amps, pushing it up to 150 amps and going back to 30amps. What we are looking for is 25,000 load dumps. That puts pressure on all the components.”

The only unit that Prestolite remanufacture is one family of alternators that are made for Volvo buses and coaches. Despite being old technology, demand and volume remain high for the unit.

Rather than spreading themselves too thin Prestolite’s diverse portfolio of products keeps them strong. Being involved in so many sectors is Prestolite’s recipe for lasting success.