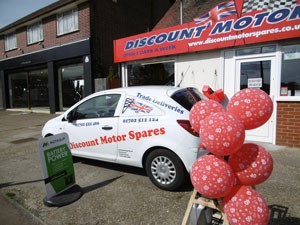 Forty years have past since the tuning boom of the mid-1970s when accessory shops sprang up left right and centre.

The days when members of general public might have decided that a Sunday afternoon might be best spent dismantling a carburettor on the kitchen table, or wiring in an eight-track player have long gone, but a good number of those accessory retailers still remain, albeit with a different business model.

One example is Discount Motor Spares in Leigh-on-Sea, Essex. The factor is celebrating its 40th anniversary this month, and while the shop front of waxes and wiper blades might be familiar enough, its core lies elsewhere. “The main business is to the trade these days and not the public. It used to be the other way around of course,” notes Andy Fletcher who co-owns the business with his brother Mark.

Andy and Mark took over the store just over a year ago, although both of them were well acquainted with it as the business. It was started by their dad and his brother. “There were three shops originally,” recalls Andy, adding that the other two were sold many years ago.

When taking over the business, the Fletcher brothers hadn’t planned on doing a major renovation to the customer-facing side of the business. However, fate intervened just a few weeks after taking charge, when in the small hours of the morning an out-of-control Subaru Impreza crashed off the main road and went all the way through an adjacent barber’s shop before coming to rest inside with its nose poking through the broken internal wall of the motor spares shop, scattering the display and severely damaging the structure of the brickwork and ceiling. “I didn’t know about it until I got to work and found I couldn’t open the door,” notes Andy. “The car had been towed out by then, but when the builder got here, he said that it shouldn’t have been touched as we could see the structure moving.” 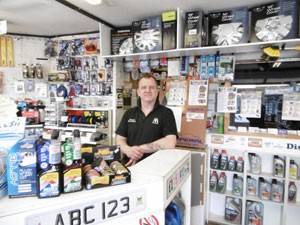 Fortunately, friends, family and the local community made light work of the clear up and rebuild. All agreed that the finished result looked brighter and better than ever before.

However, as mentioned, it is factoring to garages that is the mainstay of the business, and the good reputation the parts store has built with garages over the years is due in part to its association with component distributor Motaquip. “We must be one of its oldest accounts,” Andy says, adding that brake parts had overtaken filters as the fastest moving items.

Business has been brisk, with the company exploring new avenues in trade distribution: “We are running three vans at the moment. In fact, we have recently bought another one as we are doing quite a bit of work with Imperial body panels,” explains Andy. “Imperial had approached us about distributing, which we were happy to do, but we needed to go and get a taller van to move the panels around in. We’d recently bought the other two smaller vans brand new for factoring, but we bought the van for panels second hand – and it has more than paid for itself already.”

With the upturn in business, Andy is considering the purchase of another vehicle. “I think we could do with another van and driver as we’ve been consistently busy. However, the risk is if it is quiet, then we have another van and another driver doing nothing.” Nonetheless, it is something the brothers have been discussing. “I say we are in a good position – but then I’m more of a chancer than my brother,” laughs Andy.