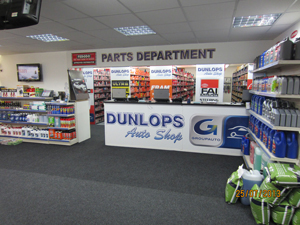 Fred and Stewart Dunlop on how their Auto Shop is looking good for the future.

Shettleston Road and Dunlops Auto Shop in Glasgow are celebrating their ruby anniversary together since Fred Dunlop first opened the store at number 1218.

His history in the East End of Glasgow actually goes back a further ten years as he actually started work in the area with his father at Macintosh & Dick, a Ferodo distributor.

Since opening Dunlops in the 1960s, however, the classic factor/retail operation has moved and continually expanded along Shettleston Road. Fred might have retired, but business has been kept in the family in more than one sense.

With framed receipts for Ferodo brakes in shillings on the walls of the office, Dunlops still distributes the brand, among many others, and is run by Fred’s son and daughter Stewart and Karen with Manager Jim Steenson.

The first shuffle along Shettleston Road came a decade ago when the business moved from 1218 to number 1250. This site was extended three times before the premises next door, at 1251, were purchased, demolished and rebuilt to further grow the footprint.

“Basically the business is going forward,” says Stewart. “The first shop was one van but now we have six and plans for another three to be added, hopefully within the year.

“We survived no problem at all and do it all on service. We stick to a certain area and we get to customers within 15 to 20 minutes.

“We’ve got the shop at the front and the parts at the back. We do about 65 percent trade and the rest is retail.”

The extension into 1251 allowed Dunlops to expand its parts storage, but it also allowed a front-of-house increase in the size of the shop. 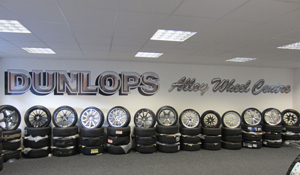 “We’ve got a substantial walk around shop and we do well with that, too, it’s ticking away. One of the main reasons for the extension, though, was to create a showroom for our alloy wheels.

“We’ve always done them, and had a big display at the front for the past five years, but we’ve got more than 50 sets in stock. They’re doing well, there’s not really anyone else doing it in Glasgow now.”

With the building work finished in the summer, Dunlops had a good selling spell with the wheels before the winter weather started to settle in and thoughts turned to screenwash, de-icer and battery charging, lines it gets through Tetrosyl, Saxon and Streetwise.

As well as the increase in shop space there’s the increase in the parts store. Stewart reckons both areas of the business will continue to grow and that the split between factor and retail will remain at 65:35.

Besides the new vans Dunlops also took on a couple of new youngsters to bolster total staff numbers to eight.

Fred, now living mostly in Spain as the Scottish weather doesn’t agree with him, is about to take off for a three-month Hells Angels tour of Vietnam, Cambodia and the Phillipines, but still pops in ‘to keep everyone on their toes’. You can take the man out of the shop…

“We now think we have one of the best looking shops in the UK. There is no doubt Dunlops is going forward. Stewart says things are harder today, and there are so many business closing now, but we’ve done okay. Good customer relations and quick delivery manages to keep us in the race.”

Stewart and Fred both agree that going GAU is one of the best things they’ve done for the business in terms of getting access to brands, and now it turns over more than a million a year.

As far as keeping the business in the family in the future? Fred’s grandsons Taylor and aptly-named Harley already help out on a Saturday morning and make it a fourth generation in the trade.