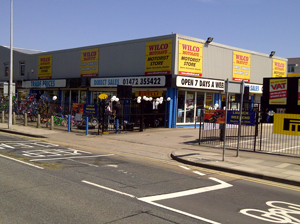 Mark King talks about rebuilding a retail business in Yorkshire.

Two and a half years ago, a car accessory shop in Convamore Road, Grimsby faced an uncertain future. Today, it is one of the busiest shops belonging to the Shortis Group. Mark King, Regional Manager of Wilco Motorsave explained: “We took it over on February 29, 2012 – which was Leap Day.”

The store was previously a branch of Motormania, King explained: “We took the three staff that were still there on and two of them are still working for us. The shop when we took it over had a mezzanine level that we didn’t need, so we took that out and built a tyre fitting bay on the side to do fast fit items including batteries and exhausts as well as tyres. This was all brand new – the previous business was not involved in fitting parts at all.”

The store had been acquired as a going concern, but it was immediately obvious that it would require a refit and a new inventory: “When we took it over there was a bit of stock in here – though not a lot,” recalls King. “Over the next three to six months we re-jigged the whole shop and turned it around with new signage. We took on five new staff and then set off on the ‘Wilco Motorsave way’, which always includes a shop and a fitting bay.”

From establishing the basic format, King worked with Branch Manager Nathan Brian to establish what was going to get this particular outlet off the ground. “What I’ve done since is invest in more staff and put in a lot of bikes. The bikes have really sold well at this branch – they have gone from zero to being the top store across the whole Shortis group. I think it’s partly because it has a good display area, but mainly it is that all of the staff have really got behind it. All of them are qualified to the 6102 standard so they can build and repair bikes properly.

“In the fitting bay, we’ve gone from a standing start to being the top of the region for tyres,” he adds.  “We’ve now expanded the offering to include MOTs and we’ve put an extra ramp in to keep up with demand. We’ve just employed an extra mechanic and another retailer in the past month because it has got that busy. We’ve got three ramps now, because it has been that busy.”

In King’s mind there is no secret to the success of a top branch. “Its all about service,” he says. “I’ve got some cracking staff and the company invests in training. Mr. Shortis has given us all of the tools and it’s the staff who make it happen. The shop itself is four walls and stock – but it is the people that make the difference. When people come up with ideas, we listen to them and use them. We’ve had some great initiatives come from the shop floor and it makes my job easier as well.”

Nathan Brian, the Branch Manger runs the fitting bay and oversees the shop while there is also an assistant manager and two mechanics in the bay, whilst the shop comprises of  a retail manager, a cycle manager and two assistant mangers. “It’s a lot of managers,” laughs King. “But they are all at that level of experience and the way the assistant managers are going, it won’t be long before they want a branch of their own – which is always a good thing for us.”

Apart from bikes the fastest moving lines at the moment are in-car dash cameras. “We’ve got one called the Streetwise that sells for just £30, then we’ve got some for £70, and we’ll have some more lines in shortly. A lot of people love them, particularly the older motorists, which I find interesting,” concludes King.