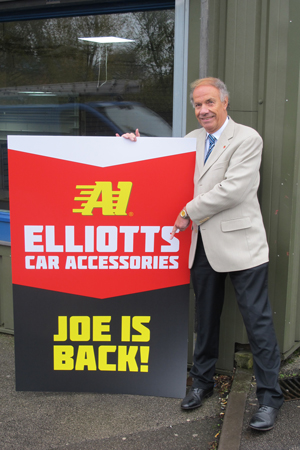 Joe Elliott on the homecoming of Coventry City FC and on returning to the world of accessory retail with the business his grandfather started in the city in 1908.

This year saw the return of a familiar face to the aftermarket, when Joe Elliott, Owner of Elliotts, returned to the motor accessory scene once again.

Bizarrely, it was something of a charming homecoming for a store that has been operating in Coventry since 1908. And it was mirrored by another one of Joe’s loves returning to the city – Coventry City Football Club after being exiled to Northampton Town’s Sixfields ground for last season.

On his return he admits that while the business is still operating on its original site – opened by his grandfather Joesph Warden Elliott, who originally sold bicycles – the approach is slightly different to the past, as he explains.

“It’s the first time we’ve decided to subcontract things to do with the business. It’s already successful, and I’m sure it will continue to be over the winter.”

The Elliotts story dates back to when his grandfather opened the store on the corner of Gulson and London Road, and he recalls how at the time of opening Coventry was seen as a hot-bed of engineering.

“My grandfather was a fantastic engineer, and he worked on one of the first flights across the English Channel when he was working for Humber, who made aero engines in the very early days,” recalls Joe. “Of course, cycles were invented in Coventry and it has always been a hot-bed for engineering.

“Through the years Elliotts progressed as a garage, it was the very first petrol station in Coventry. In fact they used to sell petrol in two gallon petrol cans, and we were the first garage to have petrol pumps.”

It wouldn’t be until 1958 that Joe would make his first foray into the business, and it is at that point that the decision was made to focus on the retail side of the business. He admits that he didn’t know too much about engines when he joined the family business, but adds that the timing couldn’t have been better as he explains.

“I suppose I struck it lucky in that the Mini, the Triumph Herald, the Vauxhall Viva and the Ford Anglia 105e came out. The whole world of motoring changed just as I went into business.

“So I went into the trade and started building up a much bigger stock of car accessories, because these cars were coming out with nothing on them, just four wheels, a steering wheel and four seats – if you were lucky. There was a tremendous opportunity to upgrade with twin carburettors, Pico exhausts and all of this type of stuff it was just fantastic.”

Throughout the 1960s, 1970s and 1980s the business thrived and at its peak it employed 28 members of staff. In the 1990s, Elliott expanded the store’s remit by introducing more replacement parts and began to sell to garages.

In 2004 however, it looked as if the dream was over, as he took the decision to sell the business to Oscott Holdings, who also bought Fletchers in Birmingham. However this tale was to have a happy ending, because when Elliotts went bust in 2010, it gave Joe the perfect opportunity to make his return to the sector.

“During this time in 1983 I was Chairman of A1 Motor Stores and that gave us a lot of fun,” said Joe. “But I only kept my one store in Coventry until 2004. Motormania ran it for a couple of years and they went out of business, then Motorworld ran it until they decided to exit the business last November.

“So the opportunity was there, and I thought I would have another go, it would have been a shame to see the company die. Obviously the company is well over 100 years old, so I have gone back in and I am enjoying it again.”