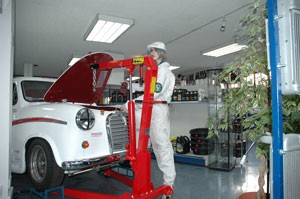 We obviously can’t go out and see people at the moment, so here’s one of our archive visits to a company local to us in Middlesex – Editor

As the first in a series of retailers that continue to grow, we visit classic specialist Moss in Hanworth who finds retail is ‘booming.

One of the newest growth area in retail perversely caters for the oldest part of the vehicle parc. Classic car specialists have been around for years, but it is only relatively recently that car owners could buy parts in a retail environment other than by mail order or from an autojumble.

Pete Cox and Pete Buckles, both of whom still work for the company today, started the company that became Moss Europe Ltd in the UK in1975. Originally the firm dealt with spares for Triumph TR sports cars as components for older models in this range were getting harder to obtain off the shelf. After merging with the Sprite, Midget, B,C,V8 Centre in 1982 the company became part of US-based Moss Motors. Americans that wanted a constant supply of parts for their British sports cars had started this company back in the late 1940s.

However, the parent firm was willing to give the UK operations a free reign as it realised that the market on this side of the Atlantic is very different to the domestic one. A lot of the business at Moss Europe will be instantly recognisable to those that know how factors work. “We have three customers, we have wholesale, we have trade and we have retail,” explains Matthew Hutchins, Marketing Manager at the firm.

However, the makeup of the market is changing according to Hutchins. “Wholesale is probably about 45 percent of the business and retail is on the up,” he says. “It used to be focussed on wholesale so it was about 60 percent wholesale and 40 percent retail now it’s probably the opposite… and retail is now on the ‘booming’ side, and where we focus a lot of our attention.”

Much of this attention to retail has been lavished on physical shops where there had previously just been a parts counter. Customers are treated to an environment where they can touch and feel a number of the products in order to get an idea of the quality – even if it is not the exact part they need. In the main depot in Feltham we noticed comfy chairs and appealing displays of polishes, waxes and various anti-rust cure-alls in amongst the parts. The centrepiece of the display was a race-prepared Austin A35, which apparently had raced at Goodwood earlier in the year. 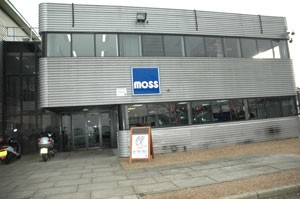 Such a shop might sound little different to an accessory shop – but at Moss the shop care had been taken to arrange the display to make it a pleasant environment for customers to pop back every weekend regardless of whether they needed anything for their car that day or not.

A lot of effort goes into the website. In times past, the average car restorer might read a spreadsheet of parts in a classic car magazine and then call up to see if the desired reference was in stock. He’d then write a cheque and post it. The supplier would wait for it to clear (accounts for the public were a rarity) before delivering the part. Today, the internet speeds things up no end, but as Hutchins observes, a site is only as good as the most recent update.

Of course you can’t keep 45,000 lines on the shop floor – so the majority of parts are kept in the warehouse at the rear, the design of which would be familiar to any modern factor. Fastest moving lines are by the door, while obscure parts (and some of the inventory is very odd) are kept on a mezzanine. Delicate and ‘ugly’ products such as body panels and doors are hung at the back of the ground floor. We even come across a brace of dusty MGBs used for checking the fitment of new and existing lines. The term ‘Aladdin’s Cave’ is a cliché, but it seems apt here – if the Middle Eastern folk hero restored old British cars of course.