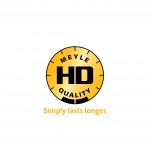 When it comes to the perennial debate over original parts or those of matching quality, Meyle has an interesting, no-nonsense contribution to make.

Andrew Tress is the UK Sales Manager at the Burgess Hill-based operation in West Sussex and says itâ€™s all a question of emissions and weight. Tress says original equipment suppliers have long been under pressure to deliver ever-lighter parts to vehicle manufacturers.

After all, increased engine and transmission efficiency is one thing, but taking a few kilos out of all of the parts that make up the whole also goes a long way to meeting tighter emissions standards.

While material technology has come on in leaps and bounds, Tress and Meyle reckon the drive for lighter components means not all parts are as robust as they once were.

Just look at the weight of coil springs as one example, says Tress who joined Meyle from ZF two years ago. Compared with today, these parts were two to three times heavier in the 1980s when emissions, and weight, were not so critical for a new model to be successfully homologated and approved for sale.

So Meyle monitors the market and steps in where it thinks it has identified a part that is failing prematurely.

It then adds an â€˜over-engineeredâ€™ alternative HD part to its range, and backs up the quality and construction with a four-year warranty. Currently around 600 of Meyleâ€™s 15,000-strong range are HD parts and cover steering and suspension, rubber-to-metal, brakes and damping components.

Once a problem part is identified, development time runs to around three to six months with plans for 100 or so HD parts to be added to the range this year.

Itâ€™s an interesting angle to take to the aftermarket with, and Tress says itâ€™s going well. The company enjoys strong sales on lower control arms for VW Polo, drop links for Peugeot 206 and control arms for the Audi A4 and E46 BMW 3 Series.

â€œWeâ€™ve only been going for a couple of years, but itâ€™s going well. Weâ€™re also only a small team, so we canâ€™t sell on volume â€“ quality and customer service are key for us.â€

Meyle has been making components since 1958, so how did it come to find Tress and Managing Director David Ward to explore the UK market more?

Ward had been selling Meyle parts through his VW Heritage business which he set up more than 25 years ago. Originally an exclusively air-cooled supplier, VW Heritage has now ventured into water-cooled models and was appointed as partner to the VWâ€™s official Classic Parts business last spring.

â€œWe were selling their parts, our customers love them, and they were looking for a distributor. It was a good fit. Now weâ€™re getting the word out and giving customers UK back-up â€“ you canâ€™t sell remotely.â€

Ward then looked for a man like Tress: â€œI started Heritage, but Iâ€™m not all-makes. I needed someone who could add up better and spell better than me.

â€œItâ€™s about knowing what youâ€™re getting out of it, whether youâ€™re throwing money into a dark hole.â€

As well as knowing his numbers, Tress also knows his parts with decades of experience around components. Itâ€™s nice to see someone get excited about rubber-to-metal bonding and care about the fact that a 1mm increase in the diameter of a ball joint means an 8 percent increase in surface area.

Currently around 50 percent of the Meyle product sold is shipped directly from Hamburg to factors including Andrew Page, General Traffic, Camberley Auto Factors and GMF, while the remainder is hand-picked from the 20,000 square foot warehouse which it shares with VW Heritage in Burgess Hill.

Ward wants to see the direct Hamburg percentage grow significantly to 70 or 80 percent over the next five years, but heâ€™s not as candid with turnover figures.

The business doubled in size last year, easy to do from a small base, while the five-year plan is for steady growth which doesnâ€™t compromise quality.

â€œWe donâ€™t want to deal with every Fred in a shed,â€ says Ward. â€œTheyâ€™ve got to be partners who will work with us. We take pride in our quality of service â€“ that will be the key thing to keep going.â€

Want to see your business featured here and in CAT Magazine? Email lives@haymarket.com or call 020 8267 5927