CHARGING UP FOR THE NEXT DECADE 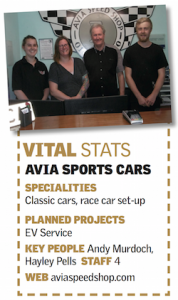 There’s two sides to Hayley Pells’ professional life as she is co-director of restoration garage and MOT Centre, Avia SpeedShop with Andrew Murdoch and co-director of coachbuilder GP Fabrications with husband Grahame Pells. “I guess it means that between the two I own a whole business” she joked.

CAT has visited Pells in the past, so we won’t go over her story and how recovered she from a serious injury obtained while serving in Iraq and had to learn new skills to join the family business of vehicle repairs. Nonetheless, it is the first time I’ve been to the Bridgend workshops and I’m keen to see the businesses for myself, as well as the oddball mix of vehicles that I’ve heard are the bread and butter of daily work here.

GP Fabrications is busy with a couple of very interesting projects. One is a bay window Type-Two campervan which was picked up for under a grand. VW enthusiasts will know that you’d be lucky to get just the logbook for that price, so it will come as no surprise if we tell you that most of the lower half of this van   seems to simply not exist. This does not seem to phase Grahame as metal fabrication is his bread and butter, as it demonstrable from another commission he is working on, a custom body for a 1930s Grand Tourer which he is painstakingly making using traditional body craft tools, such as the English Wheel.

A couple of miles over the hills, there is an eclectic mix of work in the queue for ramp time at Avia. Sure, there is the obligatory clapped-out Astra with a suspect fuel pump and a school run BMW SUV in for an MOT, but there is also a Fiesta- based Jester kit car from the early 1980s, a rubber bumper MGB and a rather rusty E12 Alpina in for some body restoration. A 1950’s Ford pickup, one of Pells’ own cars, skulks in the corner, apparently in disgrace for having the temerity to spit a cog out of its three-speed gearbox.

There are changes afoot at the business though, The front of the workshop features a kitted out, though currently disused, pastiche of a 1950s American diner. Rather than let it out separately (“It uses the same keys as the business, our insurers would have a fit!”) the plan is to allow some local young people to run it, once they have put together a suitable business plan. This is project for which Pells has already sought permission, and funding, from the authorities for.

Just because the average age of vehicle in the workshop is greater than the combined age of her two youthful apprentices does not mean that the business is shy of learning about some of the latest developments in technology. Outside the workshop sits a Nissan Leaf, acquired by Pells who is extremely keen for the team including herself to train on how to service and repair such vehicles. The workshop is also skilled in the traditional, but highly technical art of performance set-ups for fast road or track use.

Sending everyone on long and expensive training courses can be perceived as a risk for small garages though, something that Pells acknowledges. “We are keeping busy and we’re paying the bills, so while everyone’s happy, you have to ask, do we rock the boat?” she ponders out loud, and the answer is clearly a ‘yes’. “It seems to work and our clients like it, and when new technology comes in, we are ready for it – and normally before anybody else which is why we have so many trade customers” she says.

One area of recruitment and training that Pells is quite vocal about is the snail-like pace in which female school and college leavers are joining the garage trade. “We’ve been encouraged by the RMI’s ‘30 by 30’ campaign (under which 30 percent of motor trade recruits will be female by 2030) but a bit saddened that its going to take such a long time for a relatively   small increase” she says, adding that perhaps with bold thinking there might be ways to get a greater percentage faster. She makes the point that there is no physical reason why almost anybody should be prevented in working in a modern garage. “As workshop equipment has evolved it is different to when my Dad had a garage in the 1970s, there is not so much heavy lifting – which is good for everybody regardless whether you are male or female”.

“We used to damage people in this industry and there is no need to do that whether they are male or female, but it was always accepted that in this hands-on trade you were going to sustain injury. I don’t understand where that acceptance will come from”.

Pells is also insistent that changes in legislation will play their part in redressing the balance. “I think with shared parental leave [introduced by the coalition government a few years ago] has led to some blurring between traditional gender roles, although the uptake so far has been poor. Men are worried about job security – will it still be there when they come back? And will they be taken seriously after taking time for what is seen as a female role? I don’t think it is any surprise that the sectors where there has been good uptake has been academia and public services. I think those attitudes will become normalised and then spread to other professions”.

However, Pells is uncertain whether the aftermarket is geared up for such change, and what the fallout might be. “In a garage the current thinking is ‘oh, maternity leave – that’s a bit scary. We’ll just employ men’. Well with shared leave, they will have to modernise their thinking. People who become parents for the first time don’t know what was ‘normal’ in the past – they know what is normal now and they will put an expectation on employers… and will that change be something our industry is ready for” she says.

Whatever changes comes next, whether in law or in technology, we know the teams at Bridgent will be ready for them.