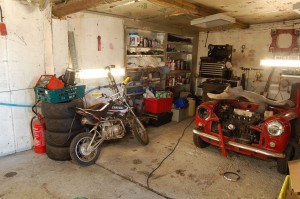 Two thieves who stole classic Minis to break for parts have been jailed.

Stephen Fiddimore and Sam Metten have been found guilty of stealing the cars, breaking them and hiding the parts across a number of lock-up garages. Spares were then offered for sale on websites including eBay.

A Met Police investigation into a spate of thefts of Minis led officers to a lock-up in Horton Kirby, Kent. Further investigations saw police raid two more garages and a unit on a farm where the remains of a number of vehicles were recovered. Police believe the pair stole 40 cars between August 2014 and May 2015.

In addition, two vehicles seized from the criminal’s home addresses were found to be stolen and cloned. The pair recived sentances of three and a half years and three years respectively, following a trial at Inner London Crown Court.

Detective Inspector Caroline Clooney, of the Met’s Organised Vehicle Crime Unit, said: “These men systematically targeted the owners of classic Minis across the south east. Many of the vehicles had been lovingly restored and were the owners’ pride and joy. Discovering that their cars had been stolen obviously caused them much distress and inconvenience”.

“I am pleased with the sentences handed down and hope it sends out a message that the Met is serious about tackling car crime and will always seek to destroy the activities of individuals involved in it.”

The classic car community has reported a spate of thefts of post-war classics in recent months. Apart from Minis, modern classics including rear-drive Escorts, Capris and Peugeot 205s have also been targeted.